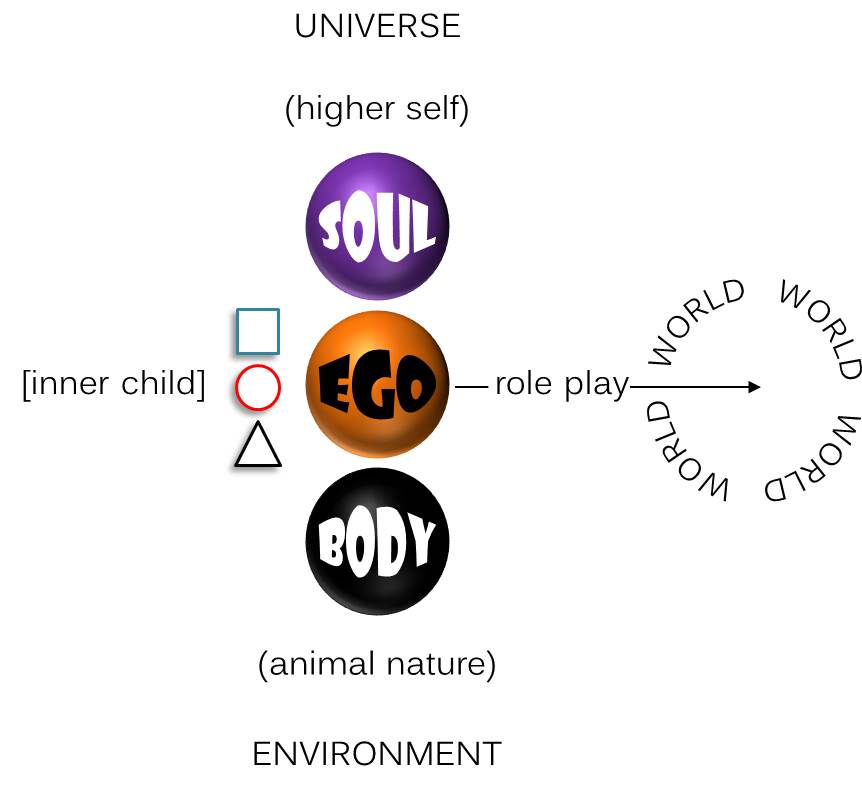 Once upon a time you fell out of union with maternal providence and exited to a realm of bright light, sharp noises, cold air, and hard surfaces. In an instant your animal instincts were activated in the business of keeping you alive. If all had been well in the womb, then in all likelihood this new blooming, buzzing environment soon resolved into the soft warm skin and cooing face of your mother. Her (or your caretaker’s) attentive presence quickly calmed your nervous system and helped you feel assured that reality was sufficient to your needs.

This assurance, imperfect as it is and without guarantees, is known as security. I symbolize it in my diagram above with a triangle, stable with a wide base and balancing everything else on its tip, suggesting that under conditions of insecurity the higher system might not hold together so well. When the nervous system registers a hostile reality instead of a provident one, the resulting pathology can be a borderline personality chronically at risk of falling through the floor and into the body’s urgency.

Your adequate care outside the womb provided an attachment bond which partly pacified your lingering insecurity, as well as served to shape your brain for life in relationships. Research confirms the vital significance of that primal bond, as a mother’s right (intuitive, emotional, and empathic) hemisphere entrains the infant’s brain into a coherent state. I have symbolized this need for attachment with a circle, with its suggestion of inclusion and belonging. If you imagine a vertical energy axis anchored in your gut where the environment is metabolized into the mass and energy of the body, then with attachment our focus has shifted upward to the heart-center.

While we’re on those shape symbols, let’s complete the set by adding a square to represent your emerging need for meaning – to have a mental model that makes sense of reality as you experience it. We’ve moved now from the heart to the head. The frame of your square tends to be as large as your attachments allow, which is simply to say that stronger attachments have the effect of shrinking the scope of relevance only to what is urgent or useful in keeping the bond intact. As a constructivist I regard meaning as something human beings construct rather than “discover” in reality. You are always busy making meaning that protects your attachments and calms your insecurity.

All of this goes into what I have called your Personality Code, referring to the preferred way you orient yourself in reality (gut/security, heart/attachment, or head/meaning) and the relative clarity of consciousness across the three centers. A high degree of clarity correlates with “ego strength,” where your personality is sufficiently stable, balanced, and unified to support experiences of ego-transcendence known as power, love, and truth. For more on the Personality Code, see http://wp.me/p2tkek-DE.

Almost imperceptibly we started with your birth once upon a time and followed the path of early development into your personal identity as an ego. The steps along the way to a fully established sense of who you are – all the drama around your need for security, attachment, and meaning – shaped part of your personality that sits just beneath and behind Captain Ego, called your inner child. I’ve put the term in square brackets to make the point that your inner child, which was who you were during your actual childhood, is today kept inside and out of your adult affairs.

However, still today as an adult whenever you get pinched, triggered, or poked emotionally, to the extent that you feel your security, attachments, and meaning threatened, something very “childish” comes out of you. You become reactive, impulsive, defensive, aggressive, manipulative, or sullen. The particular forms of expression this takes for you is what I have named your neurotic styles, which evolved as adaptive strategies for getting your way. For more on that, see http://wp.me/p3e1Rr-5Y.

It’s important to see that your ego is not some thing, like a metaphysical entity living inside your body. It is simply the self-referencing center of executive control that inhabits the roles provided by your tribe (family, peer group, professional community, political party, nation, etc.). Not only is your ego an actor playing a variety of roles in the realm of relationships, it also serves the function of managing the numerous “sub-personalities” that live inside you. You know these sub-personalities as distinct trajectories of impulse, mood, and motivation that come out and drive your thoughts, feelings, and behavior. One of ego’s principal contributions is to provide some executive management over these various (and occasionally competing) aspects of your personality.

For the most part your ego does a decent job managing this crew and steering through the role plays that comprise your daily life. Somehow through it all you want to keep your identity intact, feel secure, stay connected to the people who matter to you, and live a meaningful life. The system that makes this possible is called your world. In previous posts I have described this concept of a world on the analogy of a spider web. The spider (your ego) spins out a design of thread (your world) across The Void and proceeds to live inside it. Your world is your personal “spin” on things, the peculiar way by which you construct meaning, connect to others, and maintain your sanity.

In my diagram you’ll notice that ego isn’t the crowning achievement or last word on what a human being is or can become. While experience at this level is very dramatic and seemingly all-important, ego and its world are really nothing more than a delusion of consciousness. The neurotic styles of your inner child, the role plays where so much of your attention is invested, and even that executive center of identity called “I, myself” (ego) are a kind of reaction-formation entirely conditioned by your upbringing, your socioeconomic location, your life circumstances, and the somebody you’re trying to be. It’s not only possible but highly likely that most people spend an entire lifetime (in the Orient, numerous lifetimes) striving to keep it together, hold on to what matters, and reach a better station at some point in the future.

The spiritual life is ultimately about an awakening of consciousness beyond ego and its world. While this idea is too often conveyed in mythic-literal language as an out-of-body, end-of-life deliverance to a heavenly paradise, it is actually all about here and now. In fact, because the ego-world duality effectively cuts out a genuine present-moment awareness of existence, awakening from this trance (earlier I called it a delusion) brings you to the very ground of your being, where “I” dissolves away and All is One. This is what I name the present mystery of reality.

Your higher self, then, not only refers to your taller adult self that is capable of taking a more rational and responsible perspective on things. It also names your creative authority for transcending (“going beyond”) me and mine (as well as beyond the tribal us and ours) in a larger, more inclusive, interconnected, and holistic understanding. It is in this spirit that the term “universe” is used to speak of all things turning as one. Rather than merely naming a scientific fact, this concept expresses a spiritual realization, which is to say, a realization reached by your spiritual intelligence (SQ) of the unity of being. In other words, as I’m using it here, “universe” is not simply what’s out there and all around us, but a sacred name for the breakthrough intuition that here and now is all there is.

The universe is not only infinitely larger than your personal world, insofar as it exists on the other side of meaning; it is also prior to all meaning, deeper than words, and nothing (no thing) to speak of. It is: this – farther out than you can see, and That which quietly contemplates it all through your eyes …