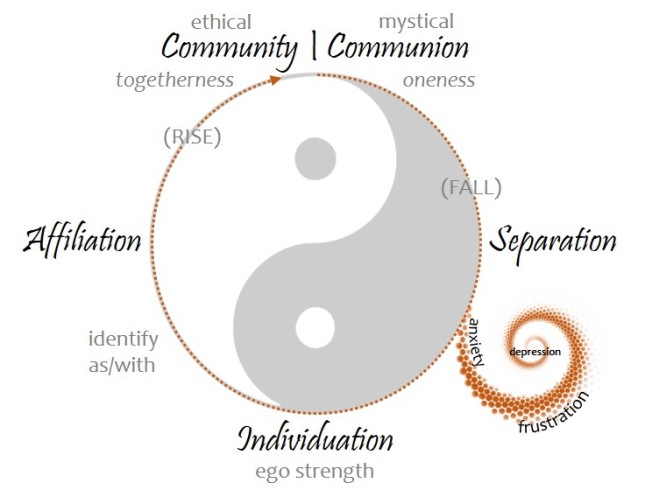 In The Power of Myth Joseph Campbell says that “Heaven and hell are within us, and all the gods are within us.” He read the world’s mythologies as “magnified dreams” (ibid) projecting through metaphor and fiction the inner potentialities and evolutionary adventure of the human spirit. Even if the Hero of this journey typically returns home with boons (treasure, technology, virtue, or wisdom) for the society that he or she left behind in accepting the call, Campbell’s Jungian lens skewed his interpretation in favor of individual-psychic over communal-ethical values.

In a sense, what I’ve been working on in this blog is a model of human evolution and personal development that follows the Hero back home – but then continues the journey into the work of creative change where relationships are transformed and a New Reality comes into being. I call this New Reality “genuine community.” Not to be mistaken as just another synonym for the group, community represents a qualitative shift from the interpersonal to the transpersonal, where partners step into an altogether new mode of being-together.

But getting to that point involves a lot of formational work for the individual, which Campbell analyzed into a dozen or so elements that make up the Hero’s Journey. My diagram illustrates its major moves as well as normal complications that can pull ego formation off course and into the weeds. I’ve set the entire cycle over the image of Taoism, where the polar principles of Yin and Yang are honored for their respective contributions to the dynamic whole of reality.

It should make sense as we get into it, so let’s be on our way.

We begin – and now by “we” I mean each of us on our own Hero’s Journey – in a condition where consciousness is immersed in, contained by, and dependent on a kind of fluid matrix of countless relationships and interactive forces. This is the womb of our antepartum existence, although we can’t be said to “exist” (from Greek existere, to stand out) quite yet due to the fact that we cannot survive outside this protective and provident universe.

But it’s also true that even outside our mother’s womb we continue to depend for our survival and development on what surrounds and contains us.

This helps us understand the prevalence in mythology of a paradisaical womb-state of the first humans at the genesis of time; but also why the birth experience is represented in both religious myth and some transpersonal schools of Western psychology as the paradoxical moment when we fall out of oneness and into the realm of duality – where a liberated life awaits.

And because the actual birth experience is serving as a metaphor of our possible deliverance or awakening from the dark (unconscious, inscrutable, and ineffable) conditions of oneness which presently encompass us, our access to this “pre-ego” state of consciousness persists as a major theme in many mystical teachings and meditative practices.

Again paradoxically, the undifferentiated state of oneness (or communion) is both that from which consciousness seeks freedom, at the same moment it is also the ground and wellspring of consciousness itself.

Psychologically speaking, we need to “fall” out of oneness and into our own separate existence as individuals before we can find our way to genuine community. Even as we move out of communion – that is, out of the envelope of oneness in quest of ego identity – its web of provident conditions continues to sustain us, albeit below the threshold of our conscious awareness. (In More Than You Think I name this our “sympathic mind.”)

In other words, while the “separation consciousness” of ego is recognized (in Buddhism and Christianity, for instance) as the alienated state of our human condition prior to salvation (Buddhist enlightenment, Christian atonement), our breakthrough to that higher state of consciousness is made possible by our primordial fall from oneness.

A more “negative” view of ego formation identifies it not just with our fall from oneness, but also – and we might add inevitably – as the separatist principle that gets us hopelessly entangled in our fallen state. My diagram illustrates this further fall, which mythology depicts as a realm of perdition, estrangement, and profound suffering, as a tightening spiral that diverges from the proper path of the Hero’s Journey and pulls us down.

The insecurity of our separation is experienced psychologically as anxiety, and this in turn motivates us to latch onto whatever promises to make us feel better (i.e., less anxious). This attachment, however, becoming an object of our desperate need for succor, cannot satisfy the demand but instead only magnifies our frustration and drives us deeper into the despairing exhaustion of depression.

I happen to believe that this debilitating spiral of anxiety, attachment, frustration, and depression is the neurotic complex at the core of our modern mental health (and spiritual) crisis.

If we were fortunate to have been raised in a sufficiently provident home environment by good-enough taller powers, our personal identity and sense of self can find their center in a position of ego strength. Through our fall out of primordial oneness, consciousness has found a stable stage “east of Eden” (outside the garden paradise) where we are unique and self-conscious individuals.

Even if our early life wasn’t all that provident, we can still find our center and gain liberation from the spiral of suffering by coming in touch with our true self. This is what Carl Jung called “individuation”: the integration of personal identity around a center of ego strength.

This is also where the question “Who am I?” plays such a crucial role in our Hero’s Journey. Because what we identify “as” (e.g., tribe, class, sect, race, or species) is correlated to what we identify “with” (other members of our tribe, class, sect, race, or species), this question has the potential of breaking open those smaller identities we may have taken on as part of our security strategy.

We come to understand identity as a function of our affiliation with the human family (Judeo-Christian), all sentient beings (Buddhist), the web of life (native American), and even with the universe itself (e.g., the New Cosmology of Thomas Berry and Brian Swimme).

As this larger and more inclusive identity begins to reshape our perspective, it also transforms our values and inspires a new way of life – in community. The undifferentiated consciousness at the beginning of our journey, which fell into separation and duality and gradually found itself (by healthy development or salvation) properly centered in ego-consciousness, breaks out and circles back to unity consciousness where “self” and “other” are together as one.

Our journey doesn’t end with this new awareness and self-understanding, but continues with our consideration of “the other” in the choices we make, as we live with greater intention for the prosperity and wellbeing of all.

Posted by tractsofrevolution on July 12, 2020 in Post-theism/New Humanism, The Creative Life