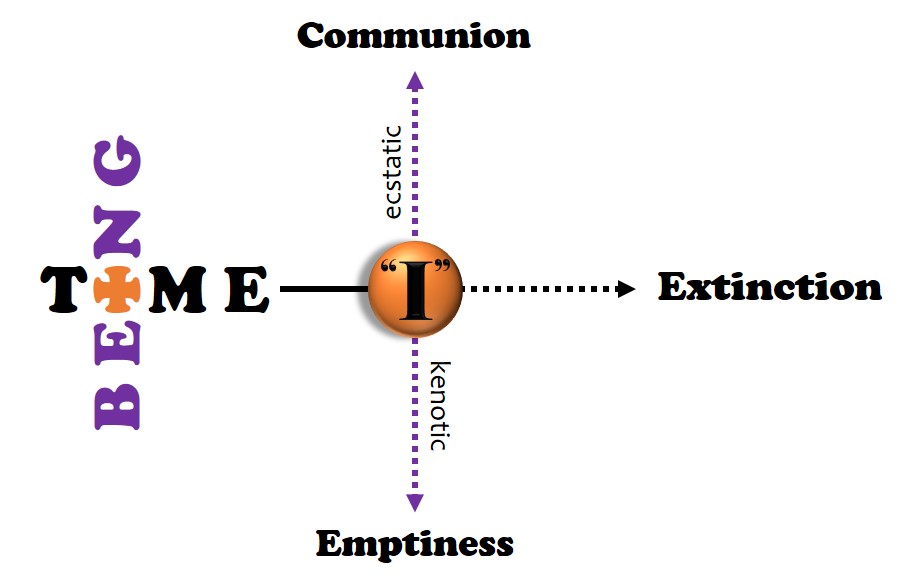 To exist is to “stand out” (Latin existere) as an individual ego or “I,” centered in yourself and tracking on your own timeline. Of course, this timeline is not interminable, meaning that it will not continue forever. One day you will die and pass into extinction. Nothing in time is permanent; nothing is everlasting.

Self-conscious human beings have suffered psychological torment for many thousands of years by the awareness of mortality, that “I” will not be around indefinitely. Most of us have lost loved ones and cherished pets along the way, and it shouldn’t come as a shock to realize that your time is also running out.

As a kind of therapeutic response to this existential realization, our species has invented many cultural variations of what we can call a “departure narrative” – stories about leave-taking, about getting out of this mortal condition, and securing your continued existence on the other side of death.

This is probably not where “god stories” got their start, since the idea of a personified intention behind the arrangement and events of our lives is historically much older than a belief in our own immortality.

In earliest religion, known as animism, humans related to their natural environment in a kind of ritual dialogue whereby nature was acknowledged and petitioned for its provident support of what they needed to live and prosper. These rituals coordinated human concerns with the seasons, cycles, and natural forces they relied on.

Even the gods at this stage were not immortal. They were not everlasting beings regarded as separate from the temporal realm of life, death, and rebirth. The purpose of religion was not departure but participation in the Great Round. Gods served the essential function of personifying the intention humans perceived (and imagined) behind the natural events impinging on their existence.

Eventually these invisible agencies were conceived as separate from the phenomena and realms they supervised.

Heaven, not just the starry firmament above Earth but the place where these superintendents resided, where they waited around and occasionally descended to take in the worship and earnest prayers of their devotees down below, was given a place in the emerging imaginarium of a new type (and stage) of religion, known as theism.

If these invisible (and now independent) personalities exist apart from the physical fields they oversee and control, then why not us? Actually it was more likely that the further development of ego formation in humans prompted this new idea of the gods as existing separate from their “body of work” (i.e., the realm of material existence).

Maybe “I” am also separate from this body. Perhaps “I” am not subject to mortality after all. When the body dies, “I” will go on to live elsewhere …

Thus was the departure narrative invented, to comfort you by dismissing death as not really happening to (“the real”) you – to this separate, independent, and immortal “I.” Since then, religions have been redirecting the focus of devotees away from time and towards eternity, away from physical reality and towards metaphysical ideals, away from this life to an imagined life-to-come.

It was all supposedly for the therapeutic benefit of dis-identifying yourself with what is impermanent and passing away. Very soon, however, it became a way of enforcing morality upon insiders as well. If you behave yourself, follow the rules, and obey those in authority, it will go well for you on the “other side.” If you don’t – well, there’s something else in store, and it’s not pleasant.

And to think how much of this was originally inspired out of human anxiety over the prospect of extinction. An independent and detachable personality that will survive death and be with god in a heaven far above and away from here – all designed to save you from the body, time, and a final extinction.

Religion’s departure narrative may bring some consolation and reassurance, but it does so by stripping away the profound (even sacred) value of your life in time and distracting you from the present mystery of being alive.

So far, we have been meditating on the axis of Time, and on your life in time. As a reminder, one day you will die and pass into extinction. But as you contemplate this fact, rather than resolving the anxiety that naturally arises by reaching for some departure narrative, there is an invitation here for you to shift awareness to a second axis, that of Being.

An experience far more exquisite and transformative than your departure for heaven is available right here and now, in this passing moment of your life. This experience is “post-ego,” meaning that it is possible only by virtue of the fact that you have already formed a separate and self-conscious “I,” and are at least capable now of dropping beneath or leaping beyond its hard-won and well-defended identity.

While the departure narrative promises a way out of Now and away from Here, this “fulfillment narrative” invites you into the fullness of life here-and-now.

Begin by taking a few slow, deep breaths: let your body relax into being. There’s nothing here that needs to be clung to or pushed away. All of the identity contracts that identify you with this tribe or that party; this rank or that role; this, that, or another label of distinction defining who you are and where you belong – drop it all, at least for now.

Imagine all of those things as tie-lines anchoring you to your place in society, and now you are unhooking from them one at a time.

As you do this, it will gradually become easier to quietly drop into your body. Here, deeper below all those crisscrossing tie-lines at the surface of who you are, your awareness opens to the feeling of being alive. Down through the nervous system and beneath the biorhythms of breathing, thrumming, pulsing, and resting, you at last come to a place that is no place, a “where” that is nowhere – the Nowhere, or here-and-now as we like to call it.

Each deeper layer in the architecture of your inner life requires a letting-go of what is above.

Each successive intentional release further empties your consciousness of content – first beliefs and the “I” who believes; then thoughts and the emotions attached to thoughts – until nothing is left to think about or even to name. I call this descending-inward path to an ineffable Emptiness the “kenotic” path, from the Greek word (kenosis) for “an emptying.”

The inward descent of Being and the letting-go or self-emptying it entails is also a highly effective practice in preparing you for a second path, of outward ascent into the greater reality that includes so many others and much else besides you. I call this ascending path “ecstatic,” also from the Greek, meaning “to stand out.”

But whereas “to exist” means to stand out as an individual ego, the ecstatic path is about stepping out or going beyond your individual ego in transpersonal communion with others – and ultimately with Everything, with the All-that-is-One.

In this same timeless moment, therefore, a profound and ineffable Emptiness invites you within and beneath who you think you are, as an expansive and manifold Communion invites you out and beyond yourself. Your awakening to this present mystery is at once the fullness of time and the fulfillment of your human nature.

There’s no need to leave.