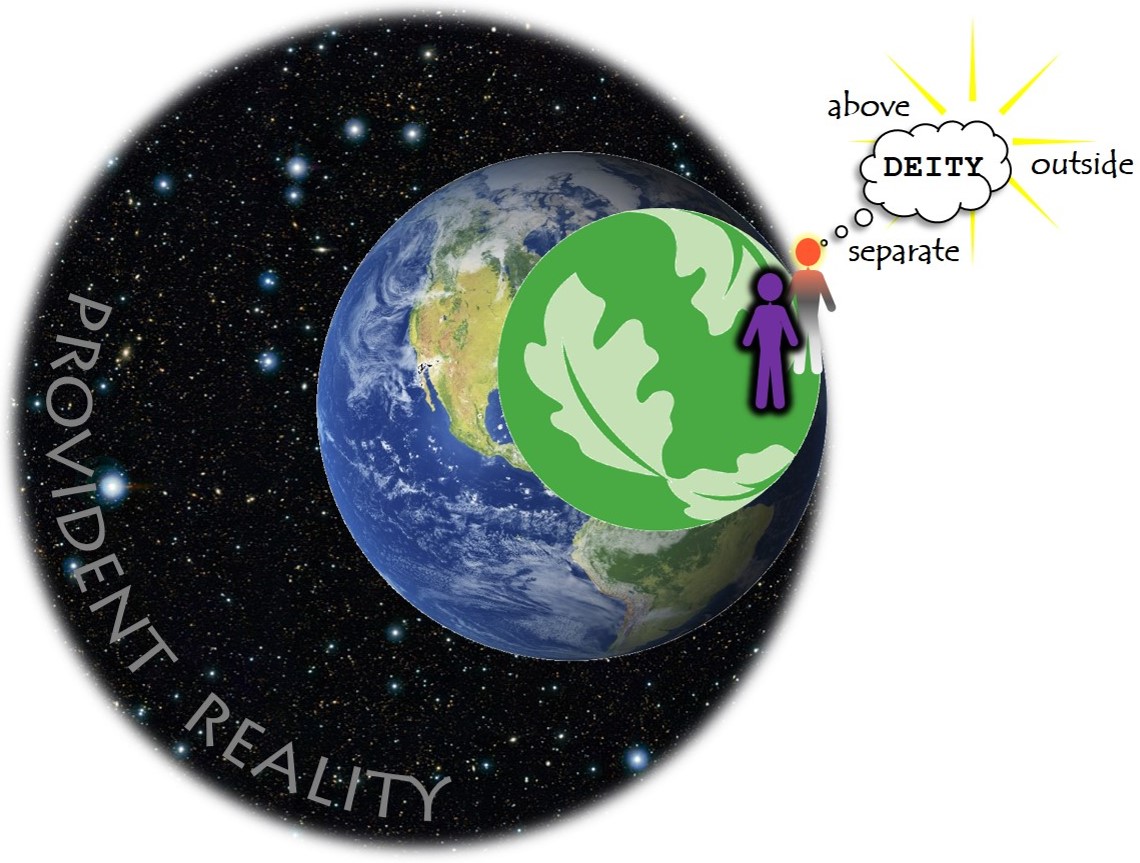 The universe is a great Web of Life. You might argue that because so much of it is uninhabitable (dead rocks and nuclear furnaces) we should keep our discussion on the topic of life focused solely on our home planet. But we must remember that Earth is itself a product of the Universal Process which began some 14 billion years ago, and even if our planet was the only place where life exists across the entire 96 billion-light-year diameter of the observable cosmos, we are logically bound to the conclusion that the universe is alive. And conscious. And holding this thought, right now.

The Web of Life, then, extends out into the cosmic surround, includes the whole earth, the vibrant system of living things called nature, and your body as an organismic member of this system. Your body can’t survive apart from the support of nature, nature can’t continue without the favorable conditions of Earth, the earth wouldn’t exist had not the universal process conspired in the way it did for our planet to get formed and flung around its home star.

You may feel separate and all alone at times, but that’s something else, not your body.

I have placed you in the above diagram, nestled in the Web of Life as an embodied and natural earthling, a child of the cosmos and latter-day descendant of stars. For now we’ll focus on the purple figure outlined in black, ignoring everything behind you and to the right. Black is my color code for your animal nature, which is extroverted in its orientation to the environment (nature, Earth, cosmos) as you reach out for the shelter, resources, and connections you need to live.

Purple represents your inner awareness, oriented inwardly to the grounding mystery of consciousness. Also called the Ground of Being, it is how our provident universe is experienced from within, so to speak, in the uplift of existence. This grounding mystery of being can only be found within as you detach attention from the sensory-physical realm and allow awareness to drop past “mine” (property and attributes), “me” (the felt object of self), and “I” (the center of personal identity), into the deep and timeless present.

Consciousness has no object at this point. Ground is merely a metaphor reflecting the experience of mystery as both source and support of existence in this moment.

This duality of outer and inner orientations of consciousness, one through the body and out to the Web of Life, and the other through the soul and deeper into the Ground of Being, is what constitutes your essential self as a human being. You are a human animal (body) with a capacity for contemplating the inner mystery of being (soul). Because your highly evolved brain and nervous system make this dual orientation possible, you and your species may be the only ones with an ability to contemplate your place in the provident universe.

I should be clear that it’s not entirely by virtue of your advanced nervous system that you are able to break past the boundaries of personal identity for a larger (Web) or deeper (Ground) experience of reality. You need a center of personal identity (color coded orange in my diagram) in place to make such transpersonal experiences even possible. We call them transpersonal precisely because they are about going beyond the personal center of identity and its limited frame of reference. The center is who you think you are, and the frame is a construction of meaning where your identity belongs. It is your world.

Things get interesting at this point, and not just a little complicated, since ego formation is not an instinct-driven process, but instead depends on your tribe. The construction of identity and its frame of reference (world) is accomplished over the first three decades of your life. During that time your tribe is selecting or suppressing temperamental predispositions according to its standards of a ‘good boy’ or ‘nice girl’. As time goes on, the incentives for compliance evolve from candy or spankings, to grades, degrees, bonuses, and promotions. The goal is to shape you into “one of us,” someone who belongs, follows directions, and will do anything for the sake of honor.

Even though your personal identity is a social construction, your tribe still had to work with (and on) an animal nature that really doesn’t care very much about rules and expectations. A strong instinct for self-preservation needed to be reconditioned so that you could learn how to share and make sacrifices. Impulses connected to elimination, aggression, and sexual behavior had to be brought under control and put on a proper schedule. The means for accomplishing all of this is called social conditioning, and the primary psycho-mechanism for its success is the ego.

Somehow your constructed identity needed to be sufficiently separated from the animal urgencies of your body, but without losing the tether to your embodied essential self.

This is where, in the deeper cultural history of our species, religion progressed out of animism and into theism. The higher power of a patron deity not only served to give supernatural sanction to tribal morality, but it functioned also as a literary role-model. I say ‘literary’ because patron deities live only in the storytelling imagination (aka mythology). Every deity is a kind of personality construct, a literary invention and projected ideal reflecting back to the tribe those character traits and virtues which the community aspires to emulate. In exchange for their worship, sacrifice, and obedience, the patron deity bestows favors and rewards (e.g., success in childbirth, bountiful harvests, increases in wealth, and beatitude in the next life).

If we look closely at the patron deities of name-brand religions today, we can identify three qualities common to them all. Underneath and behind the tribe-specific virtues, its devotees honor their deity as immortal, supreme, and absolute. In the pictorial language of myth these translate into a depiction of the deity as separate, above, and outside the ordinary world of everyday concerns.

An even closer look will reveal these qualities as the driving aspirations of ego as well.

In the need to establish a separate center of personal identity, ego must first be differentiated from the body. Because the body is mortal, ego must be – or aspire to become – immortal. Notice that the ego’s status with respect to the body is ‘not’ (im-) mortal, a simple negation without any meaningful content. In addition to being separate from the body, ego takes its position above the body (the literal root meaning of the word ‘supreme’) and manages things from up there. Finally, as a final move of separation, ego begins to regard itself as essentially independent and outside the realm of bodily concerns – just like the deity.

According to my theory of post-theism, the intended outcome of theism is the internalization of the patron deity’s ‘godly virtues’, to the point where its projected ideal is no longer needed. The individual assumes creative authority in his or her life, taking responsibility for modeling the virtues of maturity, ego strength, and community interest. This is especially important to up-and-coming theists (the younger generation), who need taller powers to show them how to be and what to do.

Throughout this very fascinating game we can’t forget your essential self. The construct of identity can now serve in the transpersonal experiences of empathy, communion, and wholeness. If we can survive ego’s pursuit of immortal glory, these are the promise of our human future.