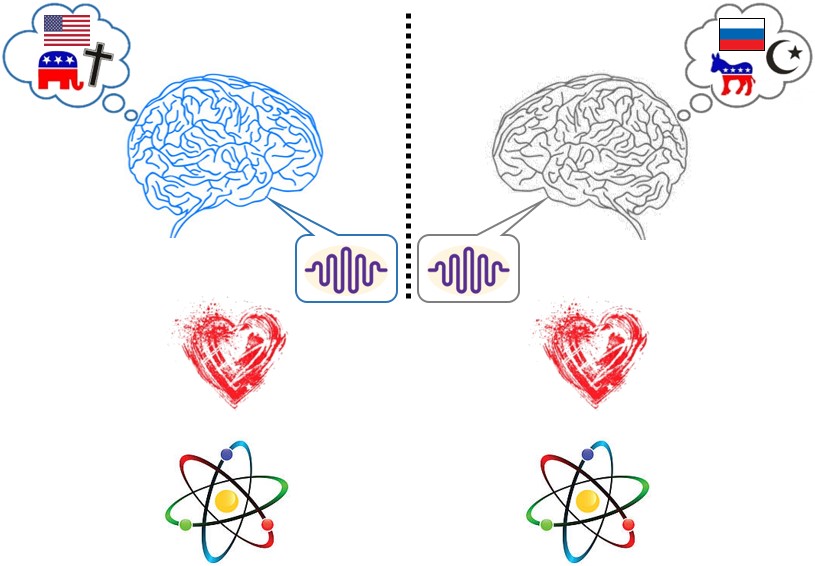 One sure mark of maturity is our ability as individuals to engage others in constructive dialogue. This term is not meant as a synonym for mere conversation, argumentative debate, or the pursuit of agreement in how we see things. To communicate with others of a different perspective means at least that we are able to listen, ask questions, understand, and reach an empathetic connection with them.

Needless to say, genuine dialogue is rarely taught and practiced these days, and is steadily disappearing as an art-form of healthy human cultures.

Just now at this period in history, our globe is deeply divided. A vast majority of the human population holds a different perspective from ours on the nature of reality, the hierarchy of values, the meaning of life, and how best to live. Whereas once upon a time we could entertain a meaningful conversation with someone of a different perspective because we shared with them certain backgrounding assumptions of a common culture, our global situation today breaks beyond the cultural commons and is forcing us to engage difference of a more radical sort.

In order to understand and start developing our skill for constructive dialogue, we need to resolve some confusion regarding its family resemblance to other forms of human interpersonal engagement (conversation, debate, negotiation) and then dig deeper into the dialogical process itself. For reference as we move along, I’ll refer to the diagram above.

The top part of my diagram illustrates the dilemma of confronting someone of a different perspective. A vertical (but broken) line separates the two, right down to the divergent meaning of the words they are speaking to each other. Assuming our interlocutors are speaking the same language (e.g., English), the words they use likely carry meaning that doesn’t match exactly. They may both speak of “freedom,” for instance, but their constructions of meaning around that idea might be literally worlds apart. This should remind us that words are not just sounds in the air or logical operators of propositional thought; additionally they are elements in our articulation of meaning, basic building blocks in our determination of what really matters.

Each opposing side might be speaking similar words, then, but be interpreting those words in a very different way. In the thought bubble behind each brain in my diagram are certain highly charged symbols that represent a few of the lines currently dividing our human experience on this planet. And of course, there are many others.

Depending on whether you are an American or a Russian, a Republican or a Democrat, a Christian or a Muslim, how you spin a word – that is to say, the meaning you assign to it – will be expressive of that particular identity.

Let me say right off that I am not suggesting that American, Republican, and Christian go together as a set (and similarly for the other side). While the differences directly across the way tend to be more mutually exclusive, it is possible, say, that you are an American Democrat who is Muslim, or a Russian Christian who favors strong republican government. It’s much less likely that you would be an American Russian (although you could be a Russian with American sympathies), identify as both Republican and Democrat (but you might be a Republican who supports domestic government programs), or a Christian Muslim (however, there are some who mix their own eclectic religious identity from different brands and traditions of world religion).

A key aim of constructive dialogue is what I earlier called empathetic connection. This requires understanding, which in turn is dependent on taking turns and listening carefully to what each other says. In the end, dialogue can be considered “successful” when partners come to appreciate each other’s humanity.

Argumentative debate – or its degenerate form so popular these days: bigoted accusation – doesn’t have this goal, as its purpose is to present the superior and persuasive position on a topic. Polite conversation will typically leave the matter of a partner’s humanity suspended in the background as less provocative opinions are exchanged. And whereas negotiation looks for potential points of agreement and compromise, dialogue strives for a place underneath our different worldviews, ideologies, opinions, and even of words themselves.

Before we go there, I need to acknowledge one thing that can derail the whole effort. Actually, this thing I’m speaking of is what prevents dialogue from making any progress at all. It has to do with the very interesting phenomenon where a belief once held by the mind ends up taking the mind hostage. If you are American or Russian, Republican or Democrat, Christian or Muslim (or whatever membership holds your identity), that self-identification obligates you with certain value-judgments and opinions about the way things are.

As beliefs, they provide orientation and guidance for living your life.

It can happen, however, and for various reasons, that a given belief stops operating as a meaningful preference in your interpretation of reality, and becomes instead the only way of looking at it. Now, what formerly had been held by your mind comes to hold your mind prisoner, like a convict behind bars. This often happens during a conversion experience where an individual is rather suddenly overtaken with the certainty of a competing truth. Or it might come on gradually as the habit of belief slowly pushes all variances out of view, leaving just this one – “the way it is.” However it happens, the result is what we call a conviction.

I made the case in Deliver Us From Conviction that this phenomenon, where a belief takes the mind captive, is the principal threat to our human and planetary future. All the other problems we face – nuclear armament, global warming, market bankruptcy, international and intertribal warfare, human rights violations around the planet or interracial conflict at home – are driven by convictions, beliefs that have made us into their convicts.

A conviction forecloses on all questions and rules out every doubt. There is no “other” way.

The way through this impasse is dialogue. But obviously, if we are to have any hope of making progress, each of us needs to examine the degree in which conviction is a driving force in our lives. The following steps of constructive dialogue can assist in this self-examination, and hopefully inspire us as well to choose its path in our dealings with difference in others.

Even the foregoing reflections on the nature of ideology, membership, and identity as the backgrounding influences behind our beliefs and the words we use to articulate them, might have already helped us loosen our grip on what we believe to be true. Notice that I didn’t say that we should let go of our truth-claims, but merely refresh our relationship to them as constructions of meaning. They are human creations after all, and we advance our cause considerably when we can remember ourselves and each other as creators.

Beneath the words we use to articulate our constructions of meaning (i.e., our beliefs) are the feelings we have around them (symbolized by a heart in my diagram). Even though belief fuses a proposition of language with an emotional commitment to its truth-value, dialogue challenges us to loosen this bond sufficiently so we can notice the deeper feelings in play. You may have a strong commitment to a number of beliefs, and while they may be very dissimilar at the propositional level (e.g., the objective existence of god and the fundamental disparity in a proposed healthcare reform bill) your feelings are what make the belief in each case important to you – quite apart from the question of whether, really, it has any anchor in actual fact.

That’s not to say that belief statements should be scrapped, or that our constructions of meaning are secondary to how we feel about them. In fact, the strength of feeling associated with a particular proposition or article of belief is less about how firmly it ties into objective reality (whatever that is), than how deep its roots reach into our needs as persons and human beings.

In other words, we feel strongly about ideas that impinge critically on our existence, security, livelihood, close relationships, personal well-being, and opportunities for the future.

In my diagram such concerns are represented by an atom, symbolizing matters of life, desire, love, and joy.

The dialogical process is a timely reminder that underneath our different perspectives and beliefs each of us experience life in very similar ways, and, still deeper down, that our needs and those of the other are fundamentally the same. How have we forgotten that before we are American or Russian, Republican or Democrat, Christian or Muslim (or whatever horizon of identity we might choose), we are human beings?

Every major awakening of spiritual intelligence in history has turned on this foundational insight – both obvious and strangely obscured – of our common humanity: with our neighbor, a stranger, an outsider, and even with our enemy.

Yes, it takes time, effort – and patience. But once we can look through our different constructions of meaning to the feelings we attach to them; and then down through these feelings to the human needs we all share, the project of building genuine community and world peace will surprise us in its transforming effect. Once we are delivered from our convictions, the creative human spirit is set free.

It only takes one individual to open the way. Why not you?