In the discussion around leadership, a good deal of attention is given to behavioral, ethical, and relational qualities that effective leaders possess and demonstrate. Great books and programs on excellence in leadership are abundantly available, and some of us are retrieving them from the shelves just now when good leaders seem harder to find. I recently coined a term – “Trumpence” – which I define as doing whatever it takes to put yourself first. Most of us would probably agree that putting yourself first is not the highest and surest mark of genuine leadership.

What makes a leader? Are leaders made? Or is leadership more about the auspicious timing between a situational vacuum and the right set of talents, vision, courage and determination in someone who senses in it a calling to make a difference? Can a society cultivate leaders from among its membership, or does it have to wait, more or less passively, for them to rise up of their own accord?

Human beings carry the genetic instructions for living creatively, courageously, and compassionately – a combination of virtues (not mere moral values but productive powers of life) that I equate with that otherwise elusive idea of the human spirit. In our nature we hold the potential to be aggressive or sympathetic, sensitive or willful, reactive or tolerant, observant or intrusive, curious or intuitive – or I should say, more or less these things, as each pair constitutes a spectrum of possibilities for expression.

In this sense we might say that an individual is a ‘born leader’, meaning that he or she seems to be a product of nature, a gift for our times from the generative depths of our species. The above-named traits are not inventions of culture but endowments of nature that nevertheless can be ‘nurtured’, shaped, or suppressed by social conditioning.

It’s helpful to distinguish between temperament and personality when it comes to leadership. Whereas temperament refers to an individual’s genetic inheritance (the various spectra of heritable traits), personality shifts our attention to the social project of ego formation. From the Latin persona, personality refers to the

unique way that one’s temperament is filtered through the restraints, bypasses, and outlets of behavior deemed appropriate by society. What we see in a newborn is not personality but temperamental expressions, and from the very beginning we are shaping what gets expressed, and how much, through the mechanisms of social feedback.

Gradually what emerges from all this social conditioning is a separate center of personal identity, also known as ego. A human being has been formed into a cooperative member of the tribe, a ‘somebody’ who both fits in and stands out in appropriate degrees. As products of social engineering, leaders are fashioned and appointed to positions in society where they are needed. It stands to reason that times of strife and hardship might motivate the social selection and reinforcement of genetic traits that make for more aggressive, willful, and intrusive leaders – those who will ‘take the lead’, overcome obstacles, and defeat enemies. When they are effective and successful, we honor and celebrate them as tribal heroes.

So far, we have considered two dimensions of leadership: temperament and personality, genetic inheritance and social conditioning, natural endowment and cultural instruction. A good part of the contemporary discussion on leadership stays between these two horns of ‘nature versus nurture’. Are leaders born or are they made? Both ‘born and made’ seems the right answer, but there’s another dimension we need to consider.

In many posts I have argued that the formation of a separate sense of identity can either be our neurotic end or the critical passage to our fulfillment as a species. As long as ego remains inside the cage of tribal expectations and orthodox convictions, an individual cannot attain to that level of personal maturity named ego strength. This is where a stable and balanced personality, unified under the confident self-possession of a fully-formed ego, is finally capable of taking creative authority in his or her own life.

Two-dimensional leaders are functionaries of the social order, performing in roles that the tribe deems necessary. They aspire to be heroes, or at least recognized by others for their praiseworthy performance. Awards, promotions, honors, and degrees are just the social conditioning they need to persist in their efforts. Many aspire to be role models for up-and-coming leaders, demonstrating excellence in their field.

With the rise to creative authority, an individual begins to live out of a higher center. Not only natural endowment and cultural instruction, but self-determination increasingly becomes a driving force in how he or she lives. Before we explore what is unique to this third dimension of leadership, I need to qualify the idea of character.

I am using the term in its narrative sense, as when we speak of a character in story. In my post Personal Myth and the Anatomy of Character I identified four traits of a strong narrative character. Grounding refers to the degree in which a character seems to belong in the narrative setting rather than hovering above or merely drifting through it. Memory is how consistent a character is through the scene sequence of a story. Integrity is a spatial equivalent to memory, referring to the way a strong character holds its identity across different situations in the narrative. And a fourth trait of character in fiction, volition, identifies the extent to which action proceeds from its own center of will instead of just happening in reaction to circumstance.

Narrative characters who possess grounding, memory, integrity and volition are not only strong elements of great stories, they are what we find most interesting. What I call creative authority is essentially the ‘rights of authorship’ that an individual must eventually assume in composing his or her personal myth: a story of identity, meaning, and purpose.

The developmental achievement of ego strength is the leading indicator of an individual’s readiness to assume this authority. This is the point where 3-dimensional leadership begins, as the individual makes choices, takes action, and accepts responsibility for the life he or she wants to live. 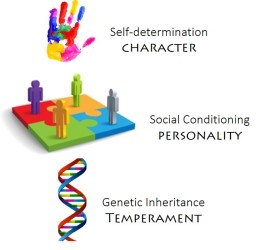 We should keep in mind that just because a person may be acting in an apparently self-determined manner, a conceited, brazen, and undiplomatic character style almost always belies insecurities deeper down. Trumpence, in other words, is really an attitude of entitlement embrangled in an insatiable craving for self-importance. The counterfeit leader compensates his (or her) neurotic ego through self-inflation rather than transcending self in service to the maximal benefit of all concerned.

Our times call for leaders who are 3-dimensional: human beings who are socially attuned, whose intuition of wholeness and creative courage can inspire the highest in all of us.