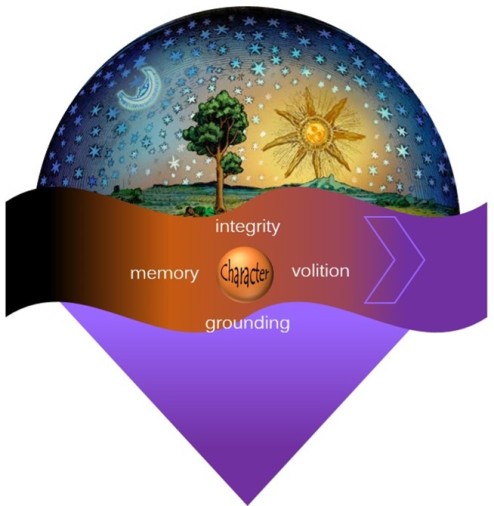 Once again, I am speaking here of religion itself, not necessarily of this or that religion, numerous examples of which have indeed lost this unifying function and fallen out of relevance in our day. I’ve explored in other posts what happens when religions misread their myths by taking them literally, defend outdated models of reality, and neglect (or even condemn) the inner depths of mystical awareness. They die, but continue on in fundamentalist orthodoxies, megachurch celebrity cults, metaphysical roadshows, or militant end-time sects.

Effective and relevant religion will provide the orientation, guidance, connection, and support that individuals and communities require throughout the full course of human development. Ultimately this will also include breakthrough realizations of a ‘truth beyond’ our conventional beliefs, and of a ‘power within’, deeper even than that cherished center of personal identity (i.e., ego) which religion itself (as theism) had earlier made the focus of salvation. This post-theist excursion into a more experiential, communitarian, and globally-minded spirituality is where the evolutionary design of our human nature is headed.

In a recent post I suggested that the narrative device of Apocalypse, which can be found in all developed mythologies, is not referring to a future cataclysm of world-collapse, but instead represents a self-conscious awareness inside the mythopoetic (storytelling) process itself, of their status as sacred fictions. Outside these narrative constructions of meaning is the present mystery of reality, the terminal end of our stories and thus of the storied world itself.

If mythology has done its work – referring to the orienting, guiding, connecting, and supporting functions mentioned earlier – then we are ready for a psychological breakthrough to a more rational, responsible, and reality-oriented way of life.

My term for this liberated mode of experience is ‘creative authority’: when the individual not only sees through the constructions that had earlier draped both reality and consciousness with veils of meaning, but goes on to take responsibility as the principal author of his or her own personal myth and its associated world. If it sounds like we’re returning to life under the shroud, I must emphasize the key insight of this breakthrough realization, which is that the individual is now a self-conscious storyteller.

In other words, we have entered the ‘ironic mode’ (Northrup Frye) where the storyteller is aware of the fact that he or she is spinning narratives across a mystery that cannot be named.

This brings us to the interesting challenge of composing our own personal myth. The art of storytelling (or myth-making) is millenniums old, which means that we have a vast library and useful tools at our disposal for the project before us. In this post I want to reflect on the features of well-developed character, using this term in its literary and not so much its moral (or moralistic) sense. A character is thus a narrative personification, an identity in story who strives (Greek agon) for (as protagonist) and against (as antagonist) the plot in its unfolding. A ‘good’ character (again, not in the moral sense) is one that evinces certain traits and makes the story particularly interesting.

Our work as self-conscious storytellers of our own personal myths will involve constructing an identity for ourselves that possesses four traits in particular: memory, integrity, grounding, and volition.

In any good story, character is an identity that becomes stronger (i.e., more definite and self-consistent) over time. A character’s memory has to do with how recognizable it is with respect to what we’ve already come to know about him or her in the story up to this point. The story’s audience starts to anticipate how a character will respond by virtue of how he or she behaved in similar scenes or challenges earlier in the narrative. With growing confidence in a character’s memory, they are better able to trust his or her performance.

As we take responsibility for the construction and management of our personal identity, each of us should consider the fidelity of our character to the person we have been. This is not to suggest that we simply repeat the mistakes of our past, or that spontaneity and fresh departures are out of the question. Even if we should undergo a conversion of some sort, the memory of character will deepen our understanding and empathy for others, adding dimension and complexity to the person we are. This is an aspect of what is known as wisdom. Alternatively, neglecting the character trait of memory can make us insensitive to others, even projecting on them the dark energies of our own repressed and forgotten shadow.

If the character trait of memory is what establishes consistency through time, then integrity is about consistency across space, or across the landscape of life situations and social engagements. A narrative character who changes dramatically from one engagement to another leaves the audience unsure as to ‘who’ will show up next. In psychology this lack of consistency across situations is evidence of ‘dissociative identity’ (formerly ‘multiple personality’), where a personality lacks sufficient ego strength to coordinate and unify otherwise diverging streams of subconscious motivation and demeanor.

In the early years of ego formation when we were being shaped, instructed, and managed by our tribe into a compliant member of the group, identity contracts dictated our role in each social situation. Now, stepping through the Apocalypse and into our own creative authority, we can take ‘authorial control’ over the person we want to be. We can join the role-play, fully aware that it is just a social convention in make-believe. Or we might take a stand for a more authentic, self-honest, re-imagined and creative way of being together. This is what Jesus called the kingdom of God.

A ‘grounded’ character in story doesn’t simply drift above the moving scenes, essentially detached from the situational dynamics of time and setting. He or she has the feel of belonging, of being rooted in that narrative world and not just an alien passing through. In this sense the story isn’t merely ‘about’ the character, but unfolds around and through the character’s individual evolution.

My returning reader will recognize this idea of grounding from my frequent references to ‘the grounding mystery’, that inner depth of spiritual life where our personal identity sinks and dissolves into an ineffable sense of being. Of course, if ego is caught in a neurotic tangle of insecurity and self-defense, any suggestion of sinking and dissolving into something else will be vigorously resisted, and inevitably misunderstood. Creative authority requires that we ‘loosen up’ and release ourselves to the deeper process, so that we can carry that ‘power within’ into the affairs of our daily life in the world.

Our fourth and final character trait picks up with that last sentence – as we take action and work out the evolving plot of our personal myth. In story, the action of a ‘weak’ character will be determined by external events and circumstances, whereas a ‘strong’ character chooses and determines it for him- or herself. Volition (from the Latin vol for will) is about a character taking action rather than reacting, moved by an internal drive or desire. The better stories in mythology, literature, film, and stage are those that are driven by strong characters whose action seems to proceed from their center.

As we break through from a mode of role performance (acting out the instructions and expectations of our tribe) to one of role transcendence (using our role in a more purposeful and creative way), we are able to construct a personal myth that supports the life and genuine community we really want. We don’t pick up a mask of identity (a persona) because someone else tells us to, because a tradition (or consensus trance) calls for it. We can live out of our own center, for values and aims that others might not find agreeable. Our action is not about defiance or transgression, but instead arches toward a deeper, higher, or longer goal.

More and more of us are ready for the responsibility of writing our own story, of composing our own personal myth. Our tribe and culture have done their part, for better or worse, and now it’s our turn. We have finally come to realize that our identities and the worlds we inhabit are really nothing more than narrative constructions, meaningful fictions of our personal and interpersonal life.

It is time to step into our own creative authority, take leave of the gods, and become fully human. This is life after the Apocalypse.