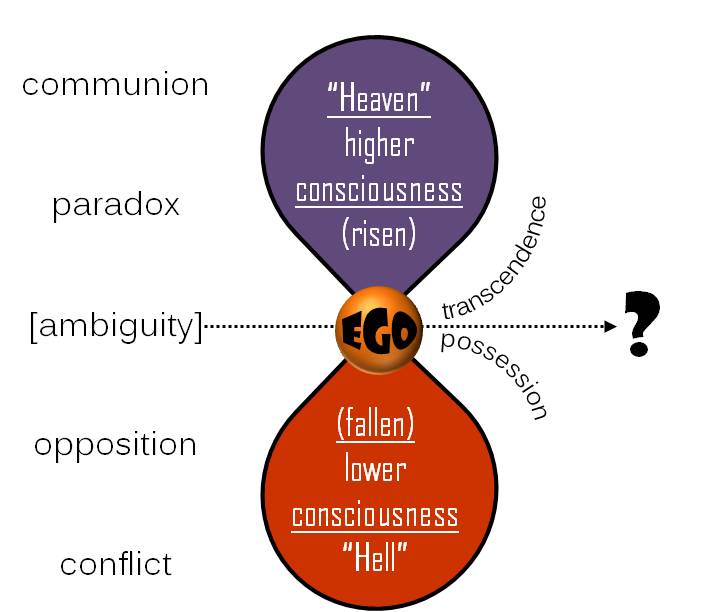 A growing consensus regarding the sacred narratives of religion, called myths, is that we must take them literally or else toss them out as bad science and obsolete fictions. Those who would rather not fuss with interpreting the myths are content to simply believe them, and those who can’t with intellectual integrity believe the myths are content to leave them be. In either case the deeper insight contained in them is ignored and rendered mute.

It’s difficult for some to open their minds to the possibility that myths might not be records of miraculous events and metaphysical realities, but not ignorant superstition either. But what other choice do we have? Things either happened just as the myths say they happened (or will happen) or they didn’t (and won’t). Either reality is arranged according to the metaphysical architecture testified to in the myths (with a literal heaven and hell, for instance) or it’s not – right?

Actually, the answer is no: this simplistic either-or logic is exactly wrong. In fact, as I will try to show, the mental orientation responsible for casting our alternatives in such a dualistic fashion is part of what the myths intend to expose and help us overcome. I say “intend” and not “intended,” because myths are living narratives and not mere curiosities of the past. The challenge in being human is essentially the same today as it was thousands of years ago, and myths are transcultural maps that reveal the paths ahead – one that leads to heaven and another that leads to hell.

If it sounds as if I have just slipped into a metaphysical reading of myth with my reference to heaven and hell, I want to assure my reader that this is not the case. To explain, let’s begin where myth itself was born, in the state of persistent ambiguity called the human condition. The prefix ambi translates as “both,” and ambiguity refers to how our situation – the human condition as it impinges on me here and you there, wherever we happen to be – sets us at a place where the path can go in one of two directions.

On the one hand, this ambiguity might collapse into opposition and eventual conflict: the “both” are seen as fundamentally opposed, unconnected, divided, and separate. If the process of our individual ego formation was particularly difficult and we came into personal identity under conditions of neglect, abuse, deprivation, or other trauma, our path might naturally fall to a lower course where everything is cast into antagonism. We are now in the realm of lower consciousness, a realm of distrust and suspicion, of hostility and retribution. This is hell.

When we fall into lower consciousness, as the mythic Adam fell out of his garden paradise, our ego becomes possessed by the passions of insecurity and aggression, intent above all else on getting our share and guarding what is ours. In hell, everyone lives in a state of desperate isolation, tormented by insatiable craving and captive to our own self-destructive compulsions. Our relationships are in chronic conflict, as we are incapable of opening ourselves to one another in empathy and love.

On the other hand, the ambiguity of our human condition might resolve into paradox and communion. In this case, the “both” are seen as fundamentally related, connected, united, and whole. Just as the path into hell might feel more natural to us if our ego identity was forged in adversity, the rise to a higher course is likely easier when our sense of self had been nurtured into formation by more provident higher (i.e., taller) powers. We are now in the realm of higher consciousness, a realm of trust and compassion, of generosity and freedom. This is heaven.

When we rise into higher consciousness, as the mythic Christ (whom the apostle Paul named the Second Adam) rose from the garden tomb, our ego completely transcends the deadly entanglements of insecurity and conviction. We are truly free to give of ourselves, to share what we have with others without concern for returned favors. In heaven, everyone lives in a state of inclusive community, offering our contribution to the greater good and truly caring for one another. There is enough for everybody, and goodwill abounds.

The timeless myths can help open our awareness to the critical turning-point of this present moment, to the choice we have in every new situation. We are familiar with the popular misreading of myth, where believers look forward to heaven in the next life, when their enemies and unbelievers are condemned to suffer forever in hell. Supposedly this is scheduled to happen after we die. But who is it, really, that dies?

In all the major wisdom traditions it is ego that must be transcended – released, surrendered, and overcome; specifically the “I” who believes everything turns around “me” and owes me what is “mine.” As Jesus says in the Fourth Gospel:

Very truly, I tell you, unless a grain of wheat falls into the earth and dies, it remains just a single grain; but if it dies, it bears much fruit. – John 12:24

We make choices every day that either cast us down into the hell of lower consciousness, into opposition and endless conflict; or raise us up into the heaven of higher consciousness, into paradox and sacred communion with all things. To live in heaven, we must “die” to selfish ambition, drop our holy convictions, and even give up our desperate longing to be saved.

Those who try to make their life secure will lose it, but those who lose their life will keep it.    – Luke 17:33

The sacred narratives of religion are neither literal records of miraculous events and metaphysical realities, nor bad science and obsolete fictions of a superstitious past. They speak a timeless message, but only when we are ready to hear it.

I guess this is as good a time as any to listen.