In a triathlon competitors race for the finish through three different physical challenges: swimming, cycling, and running. Each challenge requires its own skill-set, and as any triathlete will attest, the transition from one leg of the race to the next can be the most perilous part. The three phases of the race are not ranked in order of sophistication or difficulty; running, for instance, is not somehow “better” than swimming – although an individual athlete may prefer, or feel more capable at, one challenge more than the others.

The idea came to me recently that religion might be understood on the analogy of a triathlon. For all the many forms it takes religion falls into three main types or paradigms: animism, theism, and post-theism. There are numerous forms of theism, for instance, but theism itself is a type of religion which all its various forms embody. And just as one leg of a triathlon is not regarded as inherently better than the others, neither is one type of religion better than the other types.

It may be tempting to elevate the importance of the final leg because it’s where the race is won or lost, but we know that an athlete crosses the finish line in record time only because he or she made it successfully through the earlier challenges. All the glory may be focused at the finish line, but a triathlon is not only a foot race. Similarly, the type of religion that I call post-theism is where our spiritual formation is fully realized, but our progress through animism and theism are essential to that fulfillment.

Hangups and setbacks along the way can complicate the process considerably, and in spiritual development (just as in a triathlon race) those hangups especially will introduce additional challenges that might even prevent further progress. For now, though, let’s put the three legs of religion’s triathlon on the board for a sense of the distinct challenges, of the phase transitions from one challenge to the next, and of the broad continuity overall.

Animism begins in the water, which is an apt metaphor for the nature of reality as experienced in and by the body. Animal urgencies and survival needs link us into the vibrant Web of Life, which pulsates inside and all around us. Dynamic currents in the water providently support us, even as they threaten to pull us under. Nature is paradoxically gracious and violent, generously abundant yet ruthlessly selective.

In early human clans, a totem ancestor was honored as both food source and provider, as the one on whom their survival depended as well as a crossover figure through whom their human origins were traced. The totem ancestor embodied the more generally appreciated fact that all things in the Web of Life are related and interdependent.

If part of what religion does is facilitate a solution to an outstanding dilemma as regards our human condition, then “the problem” which animism seeks to resolve is the fact of death. As a body-centered paradigm, animism finds this solution in the life-cycles of nature. As new life springs forth from the ground, as fresh shoots emerge from dead stumps, and as newborns begin another turn in the great rhythm of life, we can find renewal by participating in these sacred events.

At this early stage, there is not yet the idea of individual immortality where some indestructible center of identity migrates from one life form to another. The wonder and celebration is of the way in which the hidden currents of life animate, connect, and advance through the generations.

With theism religion advances into a much more complicated social experience. The small family clans that had frequently relocated in sync with the changing seasons or migrating animals of the hunt gradually joined with other clans to form more settled villages. Agriculture and farming allowed for much larger populations. Social roles and specialized responsibilities multiplied. And the new challenge presented itself.

Theism is a type of religion that evolved and came to depend on various technologies of mediation (depicted in the bicycle). Symbols represented the sacred, stories (or myths) provided narrative background for interpreting these symbols, and sanctuaries were designed for the ritual performance of stories in a communal context. As much as possible, the liturgical cycle for these ritual ceremonies coincided with the earth seasons and great agricultural festivals.

Another essential feature of theism is its personification of the provident mystery in terms of a patron deity (or deities). The deity is represented symbolically (in icons and idols), his or her character is developed in mythology, and the deity’s presence is invoked in the sanctuary for proper worship by devotees.

An important role of the patron deity, besides providing for the community in exchange for worship and sacrifice, is to authorize a moral code and motivate obedience. Most of these rules concern social behavior and how members should get along. “The problem” for theism has to do with rule violations and the resulting guilt. Its solution involves a process of atonement whereby proper relationship is restored.

Referring to theism as “ego-centered” does not imply that it is selfish – not necessarily; only that its primary concern is with the social construction and maintenance of personal identity (the “I” who performs my given roles. A persona was the mask an actor wore in a Greek theatrical production, making it possible to “speak through” the identity of a stage character).

As the religious orientation of what I call a protected membership, theism encounters destabilizing threats on two fronts. Socially, as its local population becomes increasingly diverse and pluralistic, the agreement of lifestyle and belief across its constituency weakens. And at the level of individual psychospiritual development, an awakening of mystical intuition strains to transcend the boundaries of personal identity.

“The problem” presented here, then, is centered in the conflict between conviction (passionate, uncompromising beliefs) and empathy, which is how this transpersonal reorientation is experienced. By definition, empathy is an ability to understand the situation of another from inside, as it feels to them. This insider perception is made possible by a shift in consciousness from ego to soul, or from identity to communion.

Post-theism intentionally steps through the rules and roles by which identity is managed in order to engage reality in its oneness, its wholeness, its holiness. It takes up its cause “after god” (post + theos) without the need to dispute god’s existence, lampoon his devotees, or disparage their beliefs. The positive contribution of theism to the longer course of human development can be honestly affirmed, even as the post-theist celebrates a more inclusive, less anthropocentric (human-centered) vision.

In light of my analogy of a triathlon we can perhaps better appreciate how religion has served the function of connecting us to reality during each major stage of our evolution as a species, and how it has served the longer purpose of our fulfillment through the ages, across cultures, and in those who can trust its deeper wisdom. 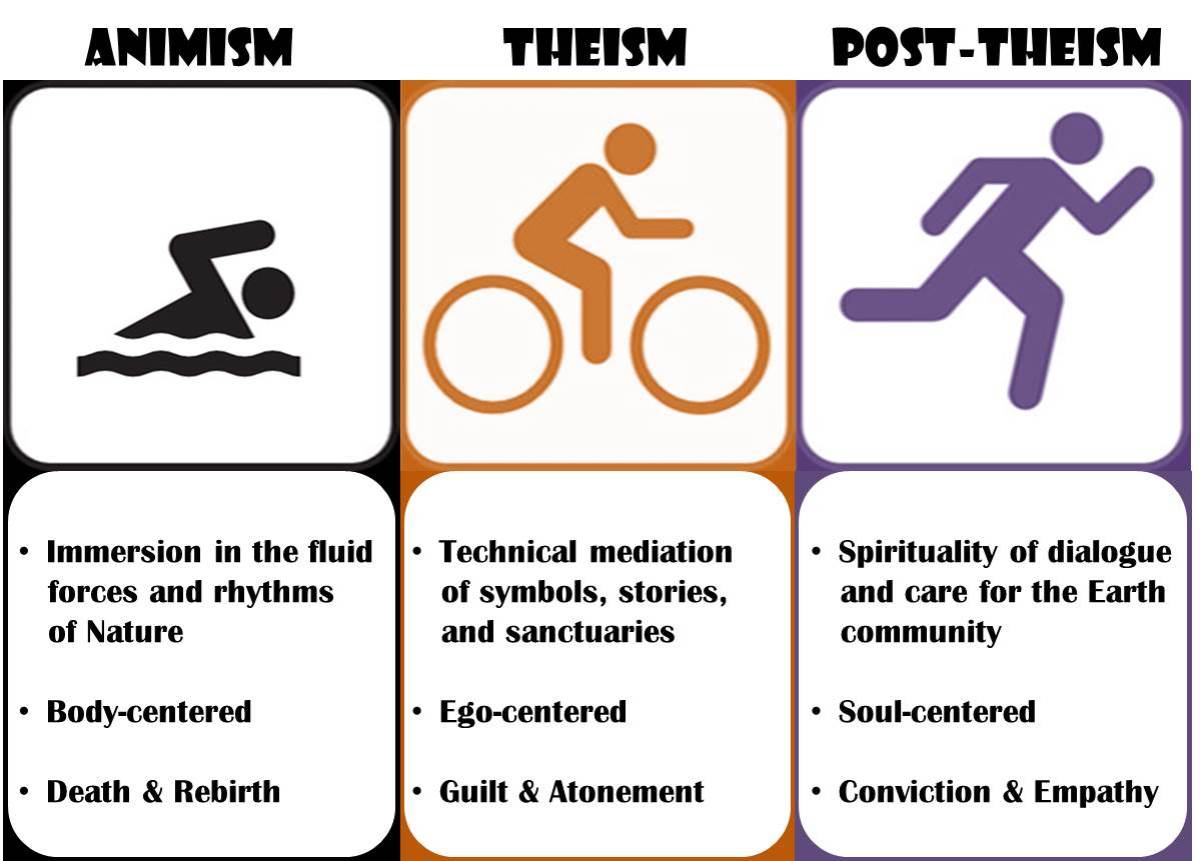