In The Great Triathlon of Religion I attempted to put more definition around the type of religion called post-theism. If we are to really appreciate its distinctive contribution to our development as individuals and our evolution as a species, the meaning of post-theism needs to advance beyond being seen as nothing more than a resolution for getting on without god.

A post-theist is not merely a formerly outspoken atheist who just doesn’t care enough anymore to argue the obvious point of god’s nonexistence. In other words, getting on “after god” (post + theos) is a very different mode of life than getting on “without god” (a + theos).

I characterized each of the three types (or phases) of religion as motivated partly out of a need to address a pressing problem of our human condition. Animism has to deal with the inevitability of death, and finds salvation in the promise of rebirth – not individual reincarnation (which is a theory that comes later) but in the cycling rhythms of life that turn within and all around us. The religion of our early life (as a species as well as individuals) is all about participating in this provident web of life with reverence and gratitude.

Theism carries these same themes forward, but in a more self-conscious and socially oriented way, as the emerging center of identity (ego) takes the stage. By now, that impersonal life force moving through all things has taken an anthropomorphic turn, as any number of patron deities who authorize and oversee the world-order. The problem that theism must resolve is the tendency in the individual to deviate from group norms, to “selfishly” pursue his or her own gratification and transgress on the rules for “proper” behavior. If individuals won’t comply with this moral code, the very existence of a civil order is at risk. Guilt is induced with disobedience, and atonement provides the repentant ego a way back into good standing with the community.

The great themes of sin and redemption, fault and forgiveness, transgression and reconciliation are key ideas of theism, as it has to do primarily with interpersonal relationships, the threat of social breakdown, and the process of restoring harmony in the body politic. Toward this end, even the individual might be sacrificed for the common good – perhaps as a vicarious offering, to appease an offended deity, or to satisfy the penalty for sin.

Obviously the great theistic systems of Judaism and Christianity, as represented in the Bible, are very much in this groove. Less obvious – or rather buried underneath multiple layers of theistic commentary and myth-spinning known as the New Testament – is the First Voice of Jesus whose message (gospel) of unconditional forgiveness marked a potential (but ultimately failed) transition to post-theism. His teachings were soon obscured behind a transactional theory of salvation, where his death on a cross for our sins became the turning-point of a conditional redemption (only for the elect or true believers). 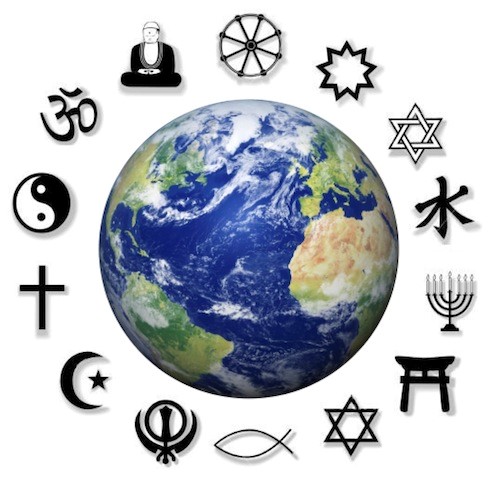 The example of Christianity is illustrative, if mostly in the negative, of the threshold dynamics of post-theism. Our primary problem according to post-theism is not death (as in animism) or sin (as in theism), but conviction, which refers to a critical reversal where beliefs once held by the mind come to hold the mind captive, in a mind-set of absolute certainty.

In this post-theistic age, conviction becomes our greatest threat to genuine community and world peace. Individuals compelled by conviction to sacrifice themselves and persecute (or kill) others are ready to bring down the apocalypse in defense of their truth. At this point, ideology takes over in a kind of “demonic possession,” locking an otherwise creative intelligence inside a closed circuit of cross-referencing dogmatic claims and motivating violence as a demonstration of devotion.

To the degree that theism proclaims the literal (i.e., metaphysical) reality of what was originally a literary (i.e., mythological) figure, an absence of empirical evidence requires it to be increasingly self-validating. In other words, its “truth” becomes more about passion than reason, more about persuasion and intimidation than existential insight and real-life relevance. For a fundamentalist the mere suggestion that the personal god of Scripture is a narrative construct and not an objective being is tantamount to atheism and worthy of damnation in the deepest hell.

For a post-theist, however, this same observation is profoundly liberating, but not because it sets us free from superstitious belief and for a future without god (a-theos). Rather it is liberating because it helps us appreciate the need for the technical mediation of symbols, stories, and sanctuaries in the longer event of our spiritual awakening, on our way to becoming fully human. Just as the developmental process of maturity doesn’t require the self-responsible adult to engage a campaign of debunking childhood myths and disproving the objective existence of Neverland, a post-theist feels no need to debate the metaphysical reality of gods and demons, heaven and hell, immortality and the afterlife.

Post-theism affirms the vital importance and relative place of theism in the scheme of human spiritual development. The god that was earlier worshiped and obeyed must gradually be absorbed by our rising aspirations, as we step into our roles as taller powers to embody a more generous and farther reaching empathy. The real “success” of theism is when the virtue of god glorified in our sanctuaries is actively manifested by us in the streets. With the personified ideal of patience, mercy, compassion, kindness, and forgiveness (as in the early Christian equation of god and love) now internalized and made flesh in us, we can take full responsibility as caretakers of earth and one another.

With growing challenges these days at all levels of concern – personal, political, and planetary – the need for us to break the chains of conviction which separate us and bravely honor the bonds of empathy that make us one is as urgent as ever.