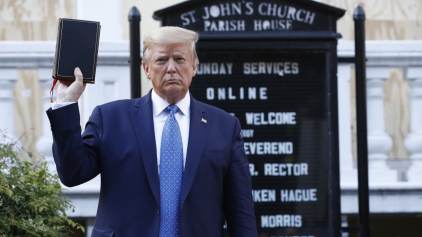 A picture is worth a thousand words. What is this picture saying? Donald Trump wanted it to say that he is God’s advocate for Law and Order in American society.

The photo op was staged after peaceful protesters of George Floyd’s murder by Minneapolis police were cleared out of the way with flash-bang grenades and rubber bullets.

Trump made his way across the park to the front of St. John’s Episcopal church, where he shushed onlookers and held up a Bible in his right hand. As they say, “Nuff said.”

This president wasn’t going to allow rampaging thugs to terrorize US cities with their savagery, vandalism, arson, and theft.

Donald Trump sees himself on God’s side – or is God on his side? Either way, the values he is espousing are about righteous authority, law and order, and of a will-to-power above all else. Any transgression of the law is rebellion against the one who stands behind the law, so in addition to paying a penalty for breaking the rules there remains the matter of appeasing the ruler-in-charge. From Trump’s perspective, he and God stand for Truth and Righteousness against the wicked lawbreakers. They’ve got it coming.

For others, the picture is an egregious example of hypocrisy. A vainglorious megalomaniac who has been on a three-year campaign to dismantle American democracy, disenfranchise the middle class, stamp out the poor and minorities, and do whatever it takes to put himself first (what in 2016 I coined as “Trumpence”) – holding up a holy book that’s all about equality, love, forgiveness, and inclusion. When asked by someone whether the Bible he was holding was his personal Bible, Trump responded that it was “a Bible.”

Can you imagine him grabbing the Bible from a bedside table on his way out of the White House, its pages worn from years of daily devotions and thoughtful notes penciled in the margins?

As they see it, this photo op is a side-by-side of good (God’s Word) and evil (Trump himself). He stands in a tradition of self-righteous so-called Christian evangelicals who claim God’s ordination and support of their bigotry. He is decidedly not on God’s side, and neither is God on his. The Bible is all about – let’s go back and grab those virtues mentioned earlier – equality, love, forgiveness, and inclusion. Donald Trump is about superiority, hatred, vengeance, and exclusion. Good and evil: there’s our choice, America.

Now obviously these two readings of the picture of Trump holding a Bible are on opposite sides, as far as the judgment on Trump himself is concerned. He regards himself as God’s leader; they condemn him as contradicting everything in the Good Book. For Trump, the violent mob is evil and he stands with the Bible against them. To his critics, Trump is evil – and doubly so as he tries to co-opt the Bible to justify his racism and white supremacist values.

Here’s a third perspective: Trump with the Bible in his hand is a split-mirror image.

On one side we have a book of scriptures that does indeed have important things to say about equality, love, forgiveness, and inclusion. But in those same pages you can also find poems, stories, and commandments glorifying racism, patriarchy, separatism, and violence against outsiders. If you read it closely, you’ll notice that all of those noble and universalizing virtues comprise only a minority report in the Bible, which flowered momentarily and for a last time in the teachings of Jesus, but was soon buried under a resurgent orthodoxy of Law and Order.

We want to make the Bible into something it isn’t: a “good book” brimming with God’s Truth. Whenever in our history it’s been taken as such, malevolent individuals and political leaders have used the Bible to advance oppression, violence, injustice, and exploitation of other humans and the natural realm. And then, too, it’s been used to promote the liberation of oppressed groups, civil disobedience in the name of human rights, and a global ethic of reverence for life.

The Bible has been used as a shield for murderous dictators, and as a sword to bring them down. In both cases the Bible has been “used”; that is to say, it’s been shaken down and picked over whenever humans have needed more power to their cause.

While this may sound heretical and sacrilegious, all it takes is a close reading to appreciate the Bible as a protracted moral debate over the balance of love and power. The history of its contributing traditions charts a back-and-forth from one to the other, from vertical management through social revolution to spiritual renaissance. A still closer reading will notice how this balance gradually tips more to the side of love as these faith traditions matured, giving (almost) the last word to Jesus and his early God-is-Love-is-God movement.

So in Trump’s right hand is not the pure good of God’s Word against the evil of violent protesters, or against Trump himself. You really have to choose “which Bible” will represent God’s Word, a selective reading that will necessarily dismiss or ignore its counterpart in the full collection of writings.

And that leaves Trump himself. Is he really on the side of good, or is he on the side of evil? Now we know that siding with the Bible doesn’t automatically make you or your cause good or evil; maybe human beings are just as morally ambiguous. If you regard the Bible as humanly authored, then it’s reasonable to expect them to reflect each other.

But are we ready to accept that Donald Trump is a mixed bag of good and evil (or evil and good) as well?

Could it be that behind his constant blaming, bullying, and prevaricating is an inner child deeply afraid of making mistakes and getting caught? Or could it be that underneath his arrogant self-promotion is a driving need to count for something, to be better than others and thus show himself worthy of someone’s approval. We’ll lose count if we should try to keep track of the number of times he threatens opponents with the shame of being laughed at and ridiculed.

What we know about his relationship with his father puts a big check-mark next to that possibility. Children who have to work desperately for a parent’s love and acceptance are really trying to find security by making their taller power pleased with them and proud of them, hoping they can finally feel safe and supported on some deep existential level. When it doesn’t come, these children grow up into insecure adults who continue to seek positions of influence and recognition so that others will regard (even honor and worship) them as exceptional.

Suggesting what might be underneath or behind what Trump wants us to see in no way excuses his behavior as an American capitalist, celebrity, and president. Only to say that he is very human – insecure, afraid, self-centered, defensive, aggressive, and sometimes a prisoner of his own small-minded convictions.

All of us to some extent use control to feel secure, use attachment as a substitute for love, use our power to manipulate others, and try prove our worth by winning their praise (or envy).

May our next president be one who understands the ambiguity of good and evil, who can hold the creative balance of power and love, who is a champion of the human spirit and a true servant leader.

2 thoughts on “Good and Evil”