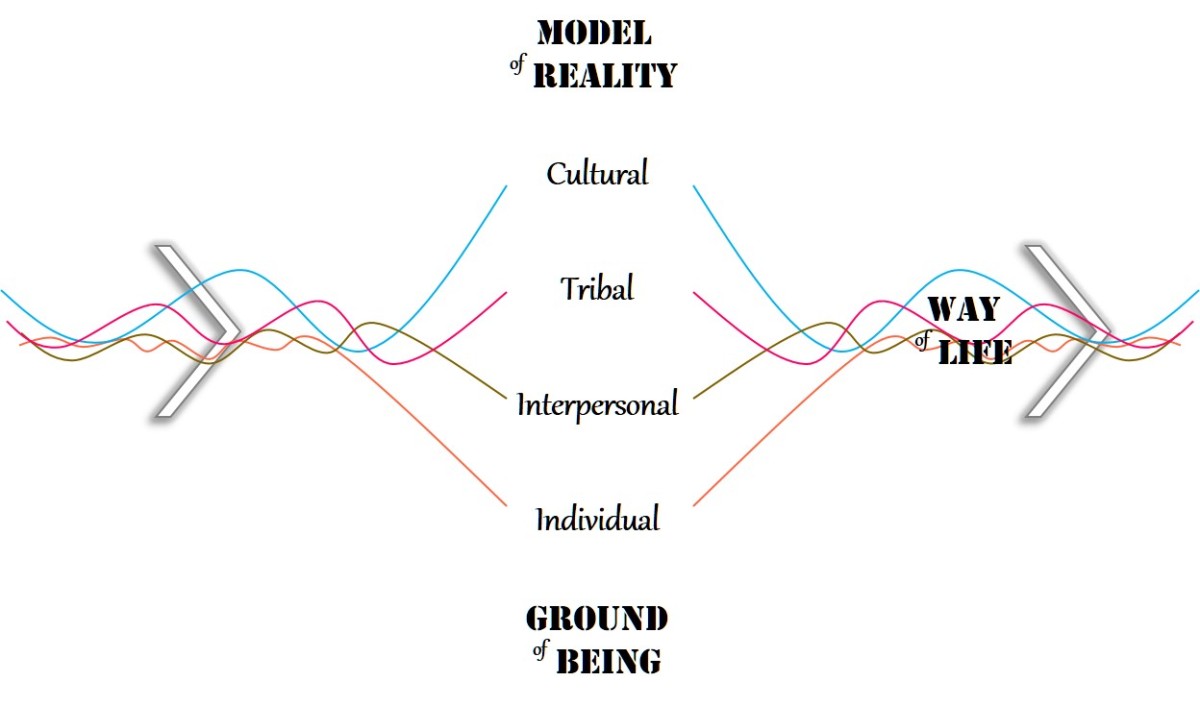 The revelation that meaning is something we construct rather than uncover in the objective nature of reality marks a crucial breakthrough in our self-consciousness as creators. Such an apocalyptic realization can be found in myths that are thousands of years old, but until very recently the end of our world was regarded as a future event. Contrary to this literal-historical reading of the Apocalypse, I’ve argued that its function in our myths is to serve as a ‘veiled insight’ into our creative authority as storytellers. Now that the secret is out, we have an opportunity to create a new heaven and a new earth.

The ability to see our myths as products of our own creative imagination, rather than naively looking through them and mistaking them for the way things really are, gives us a chance to appreciate them as art and ourselves as artists – or, even better, as artificers (inventors) of meaning and our human worlds. In this post I will identify the distinct registers of meaning that contribute to the tapestry we are weaving – individually, interpersonally with each other, in the company and traditions of our tribe, and those deep, slow rhythms of cultural mythology that carry our primal inklings as a species of belonging to a mystery we cannot fully grasp.

It’s important to remember that cultures don’t compose stories, individual storytellers do. And yet, some insights into existence and our own creative authority – as in the example of seeing through the veil of meaning by the narrative mechanism of apocalypse – were planted in myth but depended on cultural traditions to preserve them over many generations before they could be demythologized and consciously understood. Obviously then, while we as individuals tell stories and live out our own personal myths from day to day, we can expect that some universal themes of our shared human condition are coursing through those idiosyncrasies as well.

For instance, our deep inner life as a species is only accessible to us as individuals. While numerous metaphors and concepts of a culture’s language are employed for the purpose of interpreting our experience of this grounding mystery, it is only by intuitive recognition (and not, say, technical explanation) that another individual can agree and feel profoundly understood. As a metaphor, the ground of being is our attempt to put into words an experience that is too deep for words and was intuitively known by us before we acquired the language to name and describe it; it is therefore essentially ineffable.

This existential support and provident uplift of being felt within us is the source-experience behind all of our most treasured cultural representations of ultimate reality – of God as that upon which (or whom, when personified) our existence, life, and fulfillment depend. When these same representations are taken as literal descriptions of an external being, rather than as metaphorical depictions of the grounding mystery of being itself, the interpersonal recognition of truth, mentioned earlier, is bypassed for a tribal definition of god as the patron deity who demands our worship and obedience.

Of whatever tribal origin and cultural background, mystics have been relentlessly critical of religious orthodoxies that claim to have the authorized version – all others are fakes and heresies – of the “one true god.” Their second mistake was to confuse these theological constructs for some objective being, but the real problem – we might think of it as the original sin – lay in trading away the validity of inner experience for an idol of language that could be standardized and mandated from above.

Over many generations of tribal life, a people constructs a model of reality that serves to orient them within the turning mystery of all things. As cultural counterpart to the individual’s grounding mystery, a model of reality (or cosmology) functions as the universal frame in which space, time, life and destiny unfold. The great sacred narratives of mythology assume this model of reality as the framework underneath and behind their dramatic drapery, as the backgrounding map across, through, and against which the mythic action takes place. The up-and-down travels of the gods, divine messengers, religious heroes, and world saviors in the ancient Near East assumed a three-story model of reality. An account of Jesus ascending to heaven after coming up from the underworld with his victory over death, for instance, made perfect sense to its first-century audience.

It’s been pointed out many times that because our present-day (scientific) model of reality is not so vertically arranged and neatly stacked, these early Christian myths strain the credulity of modern minds. Regardless of what defenders of orthodoxy maintain, it is decidedly not an act of faith to believe them anyway – or worse yet, to reject scientific cosmology in favor of the Bible’s literal truth. This is yet another complication brought on by the original sin of forgetting the origins of spirituality: a literal reading of myth locks the sacred stories to a model of reality that is no longer accurate, relevant, or believable. We either have to leave them behind as so much superstitious nonsense, or else abandon our own intellectual integrity for the sake of ‘keeping the faith’.

In the back-and-forth dialogue between an individual’s inner experience of the grounding mystery and the model of reality by which his or her culture is oriented in the turning mystery, the daily round of our life together in society (the interpersonal and tribal registers of meaning in my diagram) evokes the question of our ethical bearing. What, after all, constitutes a ‘good life’? Our actions and interactions either bring us together in community or push us farther apart. The choices we make as consumers, the votes we cast as citizens, and the company we keep around us are continually shaping who we are, individually and collectively. Our way of life is how we work out our dreams and pursue a meaningful existence.

But, once again, if we are not internally grounded, and if we lack a sense of our place in the universe, our way of life and our life together can become a nightmare. Not inner peace, but chronic anxiety. Not holy wonder, but clinical depression. Not love, but suspicion, aggression, and violence against neighbors and nations. Psychospiritually adrift without grounding and orientation, we also lose the golden thread of our own personal myth and become susceptible to the extremes of conviction or complacency, simply because we have no real sense of ourselves. Instead of thinking ethically and with a greater good in mind, we twist morality around the pursuits of security and self-gratification.

There is good news in all of this, which is that we can always wake up from the nightmare. We are living now at the end of the world, and it’s time to begin again. We don’t have to spin the scripts of yesterday or 2,000 years ago. A new day is dawning and we need better stories, so let’s get started.