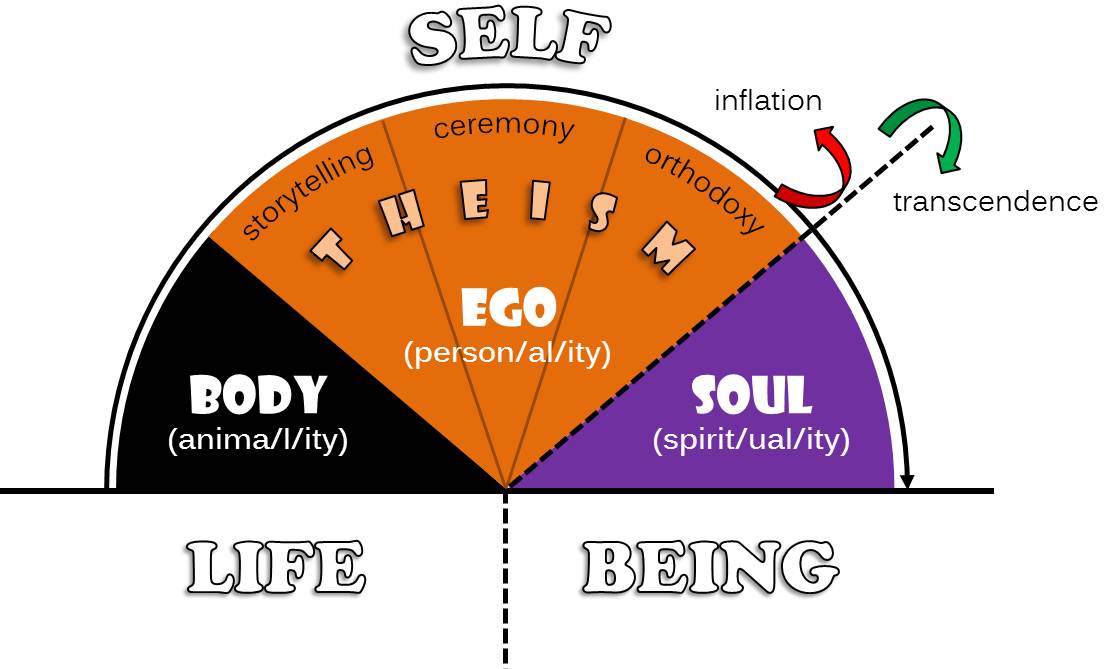 It’s good to pause every so often as you are trying to make a point, if only to ensure that your latest statement is consistent with what got you going in the first place. You might well be making a worthwhile claim, but if in the meantime you have wandered so far off the path and run out of breadcrumbs, your audience will grow tired and let you go.

My starting point was the question about the role of religion in human development, and how religion itself evolves with the advancement of individual consciousness over the lifespan. One of my basic claims is that individual consciousness engages reality at three distinct mental locations, each location opening out to a realm of experience corresponding to this point of contact.

Thus body, ego, and soul are not pieces or separate parts of a human being, but mental locations where individual consciousness opens out to the animal, personal, and spiritual realms. I’ve done my best to head off the tendency of regarding these so-called realms as metaphysical planes of existence. Alas, metaphysical realism is a sticky trance to shake off. Another gross misreading identifies the ego-soul (a disastrous conflation that leads to numerous corruptions) as “the real me,” literally throwing off the body like a cheap coat or temporal costume.

Body is our animal nature, animated by the life-force (anima), and the mental location where consciousness is involved in animality (i.e., in the dynamics of animal life). Ego is our personal identity, which is acted out through a variety of personae (social roles and masks), and serves as the executive center of our personality. And soul is our spiritual presence, the inner wellspring of spirituality and deep ground of the human spirit. Their associated realms comprise the sensory-physical (body), socio-cultural (ego), and intuitive-esoteric (soul) – as long as I can rescue the term “esoteric” (literally inner) from the secret-knowledge (gnostic) spiritualists and crackpot metaphysicians.

As the above diagram illustrates, these three mental locations are oriented respectively on the three concerns of life (body), self (ego), and being (soul), with each concern attracting secondary concerns and values into a coherent system of motivation and behavior. We are interested in different things depending on where (at what mental location) we are engaging reality at the moment. It’s also important to see that this arrangement of concerns is not static, but rather evolves dynamically over the course of a lifespan.

Infancy and early childhood is a “body-dominant” developmental period that gives rise to an “ego-dominant” period in later childhood and adolescence, which may in turn break through to a “soul-dominant” mode of being. To a certain degree the success of each of these transitions is a function of how well things went in preceding periods. A body that wasn’t providently supported in early life, for instance, will become an insecure base for the developing personality.

As a way of compensating for and coping with a jittery (and alternately exhausted) nervous system, the ego will adopt a neurotic style to get its needs met. Examples of such adaptive strategies are the common passive-aggressive, phobic-avoidant, explosive-aggressive, and obsessive-compulsive neurotic styles. (For a deeper dig into these and other neurotic styles, see http://wp.me/p2tkek-cU.)

The neurotic styles are “adaptive” not because they support higher health and wholeness, but because they help our juvenile personality resolve the body’s underlying insecurity by taking control – “acting childish” in some way. Throw a tantrum and a higher power will pay attention and try to pacify you: that’s how you get your way. Of course, the effectiveness of such tactics drops off dramatically as we enter the adult sphere of relationships and responsibilities.

Needless to say, ego formation is a complicated business and none of us comes through the gauntlet without some emotional bruises, scars, hooks, and quirks to show for it. One way that we compensate for insecurity is by gripping down on what we believe – about ourselves, others, or god; about the way it was, is now, or will be. Cognitive certainty, as unshakable confidence in the absolute truth of our statements about reality, doesn’t really address the insecurity knotted up inside us. But with time and practice we can eventually fall under the spell of our own convictions.

In my post “God Above and The Ground of Being” I took a closer look at the phases through which personal identity develops, along with the type of religion (theism) that orients, guides, spurs and attracts its development. Those phases are labeled in the diagram above: the dawn of identity in storytelling (imagination, fantasy, role-play), through the midday of ceremony where the broken time of secular life is ritually joined to the deep time of sacred story, and at last entering that twilight phase of orthodoxy, with its blessed certainty concerning the ultimate nature of things.

While this cognitive certainty (or dogmatic orthodoxy) might serve as adjustment therapy for the insecure ego, it is dangerous indeed in the way it blocks progress into a more spiritually grounded existence. Holding fast to belief may calm anxiety and shush our doubts, but it also pumps more energy into something that needs to be dropped and left behind: the ego itself. As a legitimate mental location of consciousness, ego engages us with the realm of tribal membership, conventional morality, and social recognition. It’s here that we work out who we are and hope that God Above is pleased with us.

But what happens when the deeper impetus of our human development, which must ultimately transgress the boundaries of social identity to engage the soul and its grounding mystery – what happens when this gets held up and pulled back into the ego? My word is inflation: the ego becomes even more dogmatic, conceited, bigoted, and defensive. At this point, its counterpart in God Above starts to take on the character of a judgmental, glory-seeking, and vengeful deity. Coincidence? I bet you can look down through history to those periods when God Above was especially stern, vindictive, unforgiving and merciless, and you will find insecurity and ego-inflation running rampant among his devotees.

This is where orthodoxy, that twilight phase of theism, is ready and willing to burn down the world for the sake of its truth. It has no qualms consigning unbelievers (technically any who don’t agree with it) to everlasting torment, driving out heretics, and crucifying those who challenge its authority. Even as its own are starving for relevancy inside, a dying theism will throw all its resources into buildings, publicity, and “outreach.” (I feel I’m on the verge of a rant, so I’ll stop there.)

Don’t get me wrong, as a system of religious support and orientation theism promotes human fulfillment – or I should say, healthy theism does this. As long as egos are around and people live in societies where membership means something, theism and its patron deity are here to stay.

And with a gentle push, they would learn that they can fly.