Myth and the Matrix of Meaning

Homo mythicus – I know it’s not a word, but perhaps it should be. Human beings are myth-makers.

We create meaning by telling stories. Personal anecdotes and nursery rhymes, factual reports and fairy tales, thin excuses and passionate confessions, epic histories and heroic adventures, religious creeds and scientific theories – these are just a few of the types of stories we tell. Identity itself (ego), that prize and protected treasure of contemporary individualism, is constructed out of countless storylines.

The meaning of life is what we make of it. Your personal myth is based on some very early stories your family told you, stories that carry assumptions about the way things are, where you belong, and what’s important in life. Such core beliefs are sown into the very fabric of your sense of self. You no longer question them – if you ever did – simply because they condition and qualify your grasp on reality at the subconscious level. 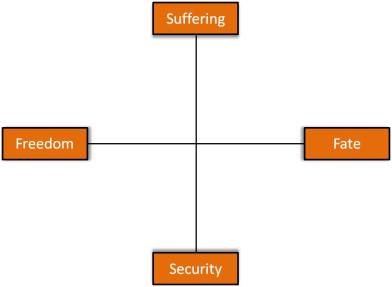 But our stories don’t simply arise spontaneously out of the creative imagination. It’s not like we got bored one day ten thousand years ago and decided to pass time spinning yarns by the campfire.

In other words, humans don’t tell stories because we have nothing else to do. Stories are how we orient ourselves in the world, and are what our worlds are made of. They carry the rhythms of our bodies and brains into the rhymes and reasons that make life meaningful.

In this blog post I want to offer up the idea that meaning itself is constructed upon a matrix of primary human concerns. If our stories are to mean something, they must take into account and work out an interpretation of life with respect to these primary concerns – and just these four.

Security. Human newborns are defenseless, vulnerable and dependent. One way that evolution accommodated our species was to get us delivered “prematurely” and prolong our development over the course of twenty years or so. During this time the operating system and local applications of our culture get downloaded into our brains. In varying degrees depending on our circumstances and early parenting, each of us emerges from childhood with a sense of security – that there is enough of what we need to live and grow.

Suffering. It’s also a fact of our existence that we don’t always get what we need to live and grow. Reality is not perfectly safe, and no security arrangement in life is permanent. This was the Buddha’s insight: Life is suffering. In the end you will lose your life, and you will lose much else along the way. Hanging on and gripping down only sets you up for anxiety, frustration and disappointment – in a word, for more suffering. The reality of suffering – chronic pain, sudden loss, heartbreak and loneliness – is something we cannot escape, though we do our best to medicate, minimize or distract ourselves from it.

Freedom. Another primary concern of humans is a function of our ability to take control (to a limited extent) of our bodies and the natural environment. The acquisition of skills and invention of various technologies has opened the scope of our freedom at an accelerating pace over the millenniums. Mastery at one level creates opportunities higher up – such is the calculus of human progress. Dependency at an early age gives way to autonomy as we grow up, taking more of life into our own control and putting more options at our disposal. A meaningful life is one you must choose – now more than ever before.

Fate. But there are limits, and every choice has its consequences. Whereas much about our world is made up and open to revision, the reality of life places constraints around our talents, strengths and possibilities. Genetic temperament deals us the cards and personal character plays them out, over time reducing the different combinations and alternate endings we might choose. And then there’s the fact that no one gets out of here alive. Probably much more than we know or can admit, the denial, avoidance and postponement of death drives much of what we do.

As the above diagram suggests, these four primary human concerns stand in relationships of paradox and tension. Specifically, security and suffering are really the polar opposites of a shared continuum, while freedom and fate are similarly related. None of the concerns can be properly understood and appreciated in any absolute sense. At this very moment, as you compose your personal myth of meaning, you are somewhere between security and suffering, freedom and fate. The patterns you weave are anchored on these four primary human concerns. 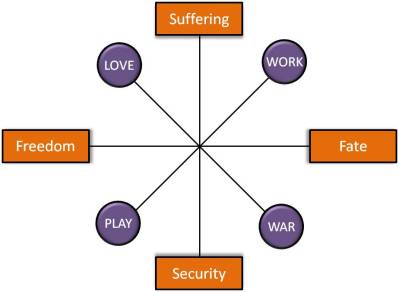 The matrix of meaning also includes what I’ll call four universal motifs, which show up everywhere in the stories we tell. A motif is a narrative theme; we might think of them as the major storylines that we weave together into our worlds. They also stand as pairs in creative tension.

Play. The meaning of your life is produced out of wonder, spontaneity, imagination and make-believe. Reality, very simply, is; but a world is something you put on – as in “putting on” a play. When you were a young child, role-play and pretending, dress-up and games were how you began to experiment with meaning-making. And of course, the costumes and toys you played with were also “propaganda devices” in your early socialization, by means of which gender instruction and class values were installed in your psyche.

Work. Eventually you needed to learn the importance of effort, determination and sacrifice in pursuit of certain outcomes and extrinsic rewards. This second motif shares the continuum with play, allowing for the possibility that your work might also be something in which you find creative enjoyment. It isn’t always the case, however. For many of us, work is simply what’s required to pay the utilities and put food on the table. Perhaps the most obvious difference between work and play is that play without purpose is infinitely entertaining, while work without purpose is one of the deepest hells we can know.

Love. Sex, intimacy, companionship and care – what would life be without these vibrant frequencies of human connection? Your earliest experience of love was likely in a nursing embrace, which may be why we have a difficult time distinguishing between feeling loved and feeling full, and why some of us eat when we’re lonely or feel unloved. The relative position of this motif to freedom and suffering in the matrix confirms what we eventually find out on our own: While love requires freedom, it moves us into attachments that eventually bring suffering.

War. You won’t find a culture anywhere on earth that doesn’t tell stories of adversarial relationships, interpersonal conflict, tribal conquest and political revolution. “Love and War” are certainly two motifs that play well together in the movies, probably with roots in our animal prehistory when males fought for sexual access to females. (What prehistory? you will ask.) As long as the primary concern of security is wrapped up in territory, resources and possessions, the borderland menace of invaders and thieves will keep the war motif strong in our minds. There’s also something about adversity that, as we say, builds character.

That’s the matrix of meaning: Four primary human concerns and four perennial narrative motifs are the “stuff” of which all stories are made. As the temperament, life circumstances, and developmental career of each person is unique, the pattern of meaning that we can call one’s personal myth (along with its corresponding world) will be individualized to that extent.

The matrix reminds us that our stories and the meaning we construct out of them are serious business. They are not supposed to distract us from the responsibility of making our lives count for something, and they shouldn’t divert our thoughtful reflection away from the challenges we face. The stories we tell at the individual, interpersonal, tribal and cultural levels will be meaningful in the degree that they assist us in spinning webs we can live in, webs that connect us in relevant ways to each other and to our home planet.

Above all else, our stories, worlds, and webs of meaning need to lift us out and provide a way back into the present mystery of reality.

Posted by tractsofrevolution on February 15, 2014 in The Creative Life

← Unconditional Forgiveness and the Bankruptcy of Retribution
This Hour of Passing →