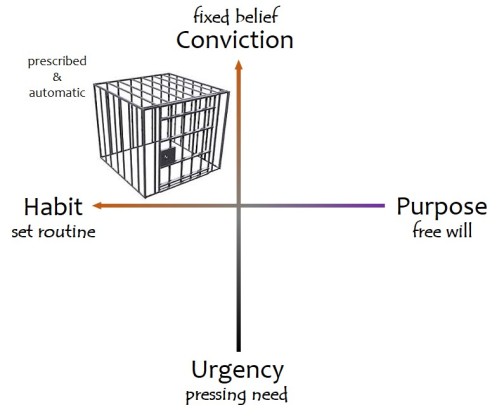 The exact age at which we begin making intentional choices in life is up for debate, but there are good reasons for putting it somewhere between three and five. This is about the time when language acquisition has provided us with a lens for organizing the world around us, and with a mirror for reflecting back to us an image of ourselves. From that moment onward, life is no longer just happening to us but rather presents us with options, different doors and alternative paths that we must choose.

But to say that we must choose our life presents us with an apparent contradiction, since just as making a choice presupposes some degree of freedom, the necessity of making a choice seems to instantly cancel that freedom out.

The exact age at which we stop making intentional choices in life can also be debated, but I would put it somewhere in our early thirties. We’ve made a significant number of choices by that time, and through the years a good minority of them have settled into the habits and convictions that move us mindlessly along the cattle tracks of daily life. It wouldn’t be an exaggeration to say that by the time we are young adults, many of us are living prescribed and automatic lives.

This would all amount to a very tragic and extraordinarily pessimistic view of life, if it weren’t for the fact that we allow it to happen. Not only do we allow it to happen, but we hasten the process which will eventually have us locked inside the cage of a mindless life.

You might like to know why we do this, and I shall give you an answer. But first I have some questions for you.

If you were to guess, what percentage of your everyday behavior conforms to routines that were set months, years, and even decades ago? These background routines got their start after you first chose to act or respond in a certain way. Then you repeated the sequence across numerous similar situations until you no longer had to think about it. They migrated to the back of your mind and took control of your behavior.

Now let’s be clear, habits are basic to human life. If you had to make a fresh choice every time and clarify the steps all over again, the skosh of random access memory in your conscious attention would be terminally preoccupied with those minutiae. You’d never be able to learn anything, at least nothing very involved or complex.

Over your lifetime you have practiced and repeated many behaviors that eventually became habits, which, by liberating your conscious attention from that more rudimentary level of control, made it possible for you to tackle and learn more sophisticated skills.

What tends to happen, though, is that even these more sophisticated skills soon become habits. And now you’re bored; or you’re restless. Maybe you are restless and bored. That, my friend, is the precondition for all kinds of interesting mental disorders, from anxiety to depression.

But let’s come back to my questions.

Here’s another one: If you were to guess, what percentage of what you think you know about anything conforms to beliefs that were fixed in place months, years, and even decades ago? By a dynamic similar to the formation of habits, you might hear a statement from someone else or in a media broadcast, and then the following week you hear it again. Randomly through the day you recall what you heard and you think about it, again. With each repetition, whether external (you hear it again) or internal (you recall it again), that sound byte gains credibility in your mind.

As it becomes more familiar and you give emotional support to its supposed truth, that bit of doctrine becomes your belief.

As before, we need to acknowledge the crucial function of beliefs in human life. They are the mental equivalent to those motor routines of habit, in this case constructing propositions that serve to arrange your thoughts on a topic and render a judgment. As prefabricated judgments, or prejudgments (aka prejudices), beliefs save you time from having to think and consider and work out what something means to you. If your mind originally constructed (or borrowed) your belief about something, the mere repetition and persistence of that belief gradually gave it control over your thoughts, at which point it became a conviction.

Just as habits serve as background routines for new skills, convictions can simply be taken as true and thence serve as foundational beliefs of your worldview.

And wouldn’t you know it, but having your mind locked in a box where you don’t really need to think anymore results, not in a more complete understanding of reality as you may have hoped, but instead in a kind of mental hall of mirrors where this belief is cross-referenced with that belief, but very little of it touches the reality of everyday life.

Now to the question of why we do it. What on Earth would motivate us as young adults to surrender our free will for the cage of a mindless (and correspondingly meaningless) life? I’ve already hinted at something else in play, beyond the gradual takeover of consciousness by the normal accumulation of habits and convictions. Is there something seductive about the cage that lures us inside?

The answer is, Yes; and what we find so alluring is the escape it affords from the freedom and responsibility of choosing our way through life, moment to moment.

Employing that same strategy of liberating energy for higher-order challenges, human consciousness has evolved over many millenniums through an ascending hierarchy of pressing needs. Our primitive survival needs for air, water, food, and shelter have about them an unmistakable urgency. Later these needs were superseded by the social needs for connection, belonging, membership, and identity.

Very much later, our shared life in society began to stretch open and transform by the energy of still higher needs, which can be named spiritual, including our need for serenity, presence, communion, and wellbeing.

This is admittedly a gross simplification of human history, but it does serve to clarify what I mean by the “pressing need” of urgency. All of those distinct registers of human need – survival, social, and spiritual – are pressing and urgent precisely because they are critical to our fulfillment as human beings. In our evolutionary ascent through those registers, the habits and convictions associated with our survival needs had to break open in order to release the creative energy that our social needs would require. We had to learn how to share our resources, how to care for others, and how to repair damaged relationships.

And now, here we are: The spiritual needs are pressing us to change, to transform yet again, this time to choose our higher selves. It is urgent that we take responsibility for our lives and start living them on purpose, with purpose, and for the purpose of becoming fully human.

The human spirit cannot live in a cage. It is time to take our leave.