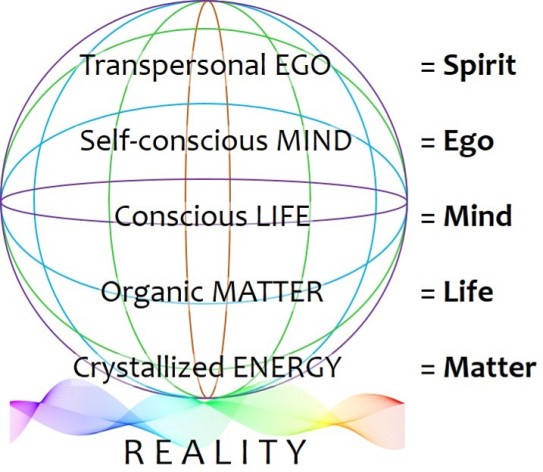 An important challenge for contemporary cosmology – referring to our present-day theory and general picture of reality – involves finding a place for the higher mysteries of mind, ego, and spirit. Like Odysseus steering his ship between Scylla the six-headed dragon on one side, and Charybdis the crushing whirlpool on the other, we need to be careful not to reduce these higher mysteries to “nothing more” than dead matter or exalt them into “nothing less” than divine immortals.

The startling fact is that our universe is alive, sentient, personal, and creative. Not every particle, nook, and cranny of it to be sure; but at least here in this moment, as we join in contemplation together, you and I.

We were not inserted into the universe from somewhere else, like alien beings or preexisting souls dropped into our bodies at conception. It’s necessary to keep in mind that any myth of religion that might suggest as much is itself an artifact of our human creative imagination.

All the evidence – and this word alone marks a decisive shift away from premodern and ancient cosmologies which were granted the status of revelations – indicates that we emerged from the universe and this remarkable garden planet of Earth. We are “of the earth” – earthlings then, having come forth by evolution out of its provident conditions.

It is a wonderful conceit of our species to have regarded those higher mysteries mentioned earlier – mind, ego, and spirit – as what set us apart, outstanding (and once more, alien) exceptions among Earth’s community of life.

But while reductionist materialism denies these mysteries as nothing more than complex accidents of base matter, and whereas metaphysical spiritualism wants to grant them an otherworldly nature, my hope is to steer a course between these two alternatives and chart a genuine “middle way.”

Even though my focus in this post will be the mysteries of mind, ego, and spirit, I hasten to celebrate the equally mysterious phenomena of matter and life. Modern science has analyzed, measured, classified, and explained an awful lot of it, but still hasn’t really “cracked the code” of how energy crystallizes into matter, or of how material forms came to life in the primordial history of our planet.

The key word “emergence” is useful, so long as we don’t mistake it to mean that what emerged was already present, perhaps dormant in the deeper registers and just awaiting its due season. Life wasn’t already present in matter before it emerged, just as the personality (ego) isn’t waiting to awaken out of a sentient nervous system (mind).

Certain conditions need to be present, both internal and environmental, for a boundary to become a threshold and the new thing to emerge.

For life to become conscious as mind, organisms needed to mutate (which simply means to “change”) in their sensitivity and response-ability to their environment. Over many millions of years, the complexity and sophistication of this evolving sentience formed nervous systems that could not only react to external stimuli but regulate their own internal states as well. Such organisms would have had a decisive survival advantage over others unable to adapt “in real time,” as it were.

Mind, then, is not something separate (or separable) from the life that supports it from below and deeper within.

This same dynamic of emergence eventually prepared conditions for mind to become aware of its own activity, as self-conscious mind, or ego. In our own species this reflexive talent of mind bending back upon itself made identity (the sense we have of ourselves as social actors) susceptible to the shaping influence of culture.

The “I” (Latin ego) that reflects on itself and addresses others is actually constructed out of numerous attachments by which we are “identified as” members of our tribe – American, Southerner, Christian, Democrat or Republican, etc. – each line of attachment anchoring us to a set of beliefs, values, roles and aims.

Just as mind doesn’t exist apart from living bodies, neither can ego separate itself entirely from the nervous system of mind. Indeed, the fantasy of doing as much is well-represented in the stories of religion and science fiction. But it’s not science. Which is to say, there is no evidence in support of the claim that self-conscious personalities (human, divine, or other species) can persist without a lifeline to living bodies with sentient nervous systems.

It is in fact right here, at the level of emergence where personal identity contemplates its place in the larger order along with the prospect of its own terminal destiny, that the worldwide reflections on human existence have entertained such fantasies as personal immortality, reincarnation, postmortem salvation, and everlasting life.

Since there is no evidence to validate them – except, of course, by the declarations of holy scripture, the testimonies of those privileged with a look behind the curtain or a voice from beyond (which cannot be counted as evidence in the scientific sense) – we might appreciate such claims for their therapeutic “truth.” In this sense, such fantasies work to calm our death anxiety, confirm our worth, clarify a purpose for our lives, and lift us into a sense of life’s higher meaning.

As someone who was raised on these fantasies and eventually got seminary-trained and ordained to promote them to others, I can actually affirm their therapeutic value, even as I push back on their factual truth. Death anxiety is real, and so is our vulnerability to feeling small and insignificant in the expanding universe.

An immortal ego who is not tied down to the sinking ship of time helps me dismiss all of that as nothing but a vale of tears, a brief sojourn on my Pilgrim’s Progress to another world.

The problem is that, in our zealous devotion and under the spell of religious orthodoxy, we have gotten tangled up in our anchor-lines of identity. The ego attachments that were meant to define us as belonging to this tribe and on earth for this purpose have become bonds of fear and conviction preventing our breakthrough to the liberated life.

Spirit is not the ego set free from its body. It is instead a mode of being where we are able, finally, to get over ourselves, to drop the charade and go beyond who we are pretending to be, so that what began so many billions of years ago can at last leap out to join the “one song” (uni-verse) and give its voice to the chorus.

4 thoughts on “One Song”