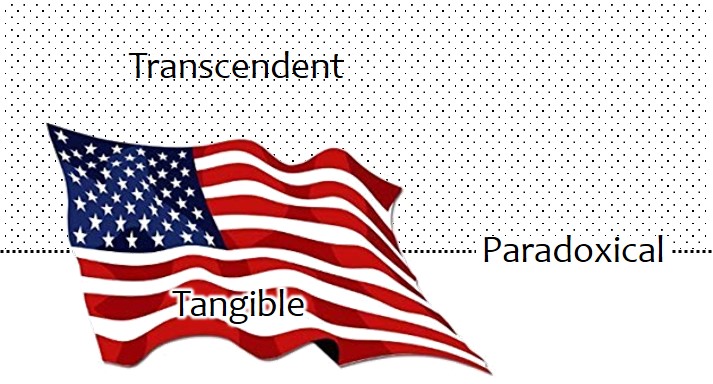 Religion is notorious for confusing its representations of God – our conventional nickname for ultimate reality – with the present mystery which, as they say in the Orient, is beyond names and forms. These representations, falling inside the general category of symbols, typically have their origin in experiences that can’t be definitively rendered in language.

So an image is found or created, which serves as a reference to the unnameable as well as a mediator for the mystery to be experienced afresh.

It would be a grave mistake, however, if we were to restrict this phenomenology of symbols to religion alone. The fact is, every sphere of human culture and personal life harbors symbols of what can’t be grasped in a purely rational and objective manner. Take for example our national flag, “Old Glory.”

As a symbol, the flag has three distinct aspects that together are the secret to its inspirational and evocative power. In the foreground – right there in front of you – is the cloth and familiar pattern of color, stars, and stripes. This is the symbol’s tangible aspect. You can see it, touch it, and hear it flapping in the breeze.

Other symbols might be more auditory than visual, as we find once again in the sphere of religion in the sacred utterance of God’s name or the holy syllable ‘om’, regarded in the East as representing being-and-becoming in a single sound.

The tangible aspect of a symbol, then, is essentially sensory-physical: it’s right there. But the American flag also stands for something, doesn’t it? We say that it represents … what, exactly?

If we answer “our nation,” then do we simply mean that Old Glory is a visual icon representing the living citizenry of the U.S.? Does it stand for the geographical landmass with its delineation of sovereign states? No, we are referring to something more – something other – than mere demographics and geography.

Is it then simply the idea of America – the concept or mental category that names a sociopolitical entity, as one nation among many? Perhaps. Other nations have their flags as well, don’t they? This one represents Malawi, that one Switzerland, and so on. Maybe the symbol is just a handy label for an abstract idea.

Actually, that’s fairly accurate when it comes to those other national flags. But isn’t there more going on with yours?

Now it could be that Old Glory is nothing more to you than a pattern of colors on cloth, period. Using it as a dusting rag or painting tarp would be perfectly acceptable. No big deal.

On the other hand, maybe for you the American flag is a sacred symbol, even if not quite religious (or it just might be). For you the flag represents a mystery commonly named “the American Spirit” – something intangible that makes the people here different and special. Not the living generations only, but also the generations past who struggled and fought for the ideals of freedom, justice, and solidarity, along with the still unborn generations of America’s future.

Spirit is a perfectly appropriate term for this ‘something more’ represented by the American flag. This is the symbol’s transcendent aspect, referring to what “goes beyond” the sensory-physical object under your gaze. We find this word – this metaphor of spirit – used widely all over the world and from earliest times to speak of mystery. Literally it means “breath, air, or wind,” and it lends itself well as a name for what can’t be named, a mystery that is invisible yet evident in its effects.

Like your breath, you can’t see the American spirit (or the spirit of God), but it moves in and out of what you are, giving life depth and meaning and linking you outward to all things.

At this point it might seem as if we’re talking about two things: the tangible object of the symbol itself and its transcendent object. Even in my description above, it was difficult to keep my words from objectifying the mystery of spirit. In the metaphor of breath, air, or wind we still tend to regard it as something (i.e., some thing) external to us, a metaphysical or supernatural object perhaps, but an object nonetheless. What’s stopping us from thinking of it as a spirit?

This difficulty is due to our insistence (or naivete) on interpreting the symbol in two dimensions (or aspects) only: There’s this sensory-physical thing here, and that elusive mysterious thing over there.

Unless we’re careful, we are about to fall into the ditch of dualism where the mystery condenses into an external object and its symbol becomes an idol. I’m using the term to speak of what happens when something tangible, conditioned, and finite is mistaken for (or confused with) the transcendent mystery it was intended to represent. Once again, religion is only our most obvious example of this problem.

In order to keep ourselves from falling into the ditch of dualism, it is critical that the symbol’s third aspect be recognized. Its paradoxical aspect is where the dualism of “this or that” and the idolatry of “this is that” are avoided by the creative tension of both “this and that.”

For those who still honor it as a national symbol of the American spirit, our American flag is both tangible cloth and transcendent mystery. As an active and valid symbol, the cloth is sanctified and the mystery is manifested in its unique form. At the very moment of contemplation, the symbol serves to mediate for us an experience of mystery, of ‘something more’ that we can’t directly apprehend or rationally explain.

We are grounded, connected, and included in something larger than ourselves.

This phenomenology of symbol, with its inherent dangers of dualism and idolatry, applies across the various domains of human culture – politics, religion, business, sports, personal life, and even science. When the paradoxical tension of a symbol snaps, leaving us with two things to figure out, or just one (and only one) to command our worship, the symbol dies, and along with it the human spirit of which you and I are incarnations.

Of whatever type, orthodoxy takes control as our ability (or tolerance) for living in the creative tension of paradox is lost. When all we’re left with are idols of orthodoxy, the long graceful arc of the human story will come to its premature end.