Look out into the galaxies, into a seemingly infinite darkness splashed and speckled with nebulae and stars beyond number. Cosmologists estimate that our universe is somewhere between 12 and 15 billion years old, born from an energy burst in which the primary structures of matter were forged and then flung, stretching the horizon of space-time as it expanded. I read recently that if you were to take two straight pins, hold them out at arms length and cross them together, the point of their intersection would conceal as many as 1,500 galaxies, each galaxy home to many billions of stars, and many of these stars suns to their own planets.

Where are you in this cosmic context? Such speculation can make you feel insignificant, until you realize that all of this has somehow worked together, over all those eons and across all that distance, to be aware of itself in you. Scientists investigate the conditions that must have obtained for life first to emerge on our planet. What were the chances that the oxygen excreted as waste by primordial single-celled organisms would eventually inflate an atmospheric dome where aerobic symbians and the teeming populations of animal life would flourish? Not very great. In fact, given the narrow margins and multiple variables that make Earth hospitable to life, your existence is something of a fluke.

If you were to take a mystical slant on this mystery rather than a scientific one, you might be able to look down into yourself, deep into your biology, through helical strands of organic chemistry and beneath the table of elements, poke your head through the space-time fabric of energy strings and quantum fields, and eventually come to an astonished realization that this present mystery of reality is provident. Whatever it is (and there really is no saying), this mystery is the very ground of your being, the life-spring and gracious support of all that you are.

It is a popular mistake to think of the soul as a metaphysical resident riding patiently inside the mortal vehicle of the body – popular not only in being widespread across the religions, but also because it provides reassurance to the neurotic ego (impostor of the soul) that it will not die but live forever. For lack of empirical evidence, science has generally dismissed this notion of the soul as a carryover of superstition or a projection of wishful thinking. And so it should, not in order to pursue its “atheistic agenda” but rather because this popular belief is neither scientifically substantiated nor spiritually respectable.

What we call “body” and “soul” are nothing more (or less!) than the outward and inward orientations of  awareness. Your body isn’t just a piece of meat, and your soul isn’t who you really are. Who you are is your ego – this socially constructed center of identity that puts on and takes off the variety of roles your tribe has programmed you to play (though you quickly forgot you were pretending to “be someone”). This skill in wardrobe change is likely what encouraged the view of the body as merely another disguise, the final costume to be dropped at the end of this earthly life.

Your body – just listen to how this comes off sounding like a possession of some sort! – is your place in the sensory-physical marvel of our universe. Looking up into the night sky, it is the complex aperture of your living eye that takes in the faint twinkling lights from across the black vault of outer space. An optic nerve carries these impulses to the visual centers in your brain where they are transmitted along networks of nerve cells, propagated through ion-charged channels, and float as chemical messages across 100 billion twinkling lights of inner space.

The material substance of your body derives as stardust from that primeval energy burst some 14 billion years ago. Your genetic line traces deep into the evolution of life, down through its very recent human expression and back into the trees, to the amphibian marsh, and out into the sparkling sea where an auspicious arrangement of organic chemistry first began to capture sunlight and store it away. Primordial sea salt still runs in your blood and conducts electricity through your cells.

Your soul isn’t just along for the ride. It is where consciousness breaks past the attachments and defenses of ego, descends through longer and more relaxed frequencies of awareness, until it dissolves entirely into the provident support of its own ground. We could call it your essential self (from esse, being), but only if we were careful not to separate it from the living organism of your body. The body and its realm (the sensory-physical universe) is properly regarded as trans-personal, beyond (and around) the ego-centered personality, while the soul and its realm (the intuitive-mystical ground) is entero-personal, within (and beneath). 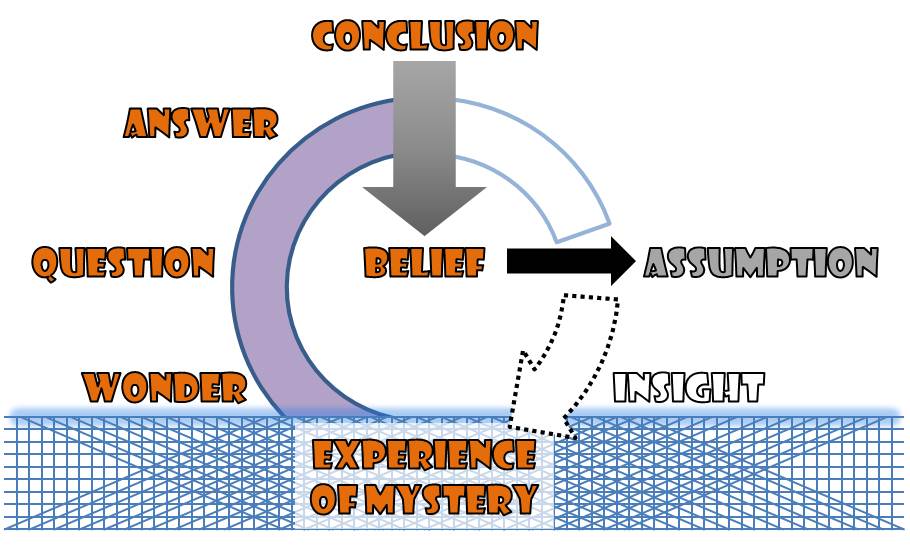 Science and spirituality are thus two ways we touch the present mystery of reality, outwardly and inwardly. Neither mode of experience is terribly interested in what it means. Meaning comes later; or more precisely, it is subsequently constructed as we try to make sense of our experience. In the spontaneous moment of engagement with reality, we are typically transfixed in wonder, not thinking about it but somehow aware of it all at once. As we stand under the starry canopy or surrender deeply to being, our wonder turns into a quest for our place in it.

Our quest for meaning is articulated in questions, about who we are, how it began, where it’s going, and (perhaps most urgent of all) why we are here. These questions are invitations to answers – meditations, stories, and theories that bend the outgoing line of inquiry back like a boomerang to the contemplative mind. Answers give us the orientation we seek, serving to validate our questions and provide conclusions we can use to build out the larger meaning of our life.

If we were paying attention we’d take into account the various ways that the present mystery of reality – the way things really are – spills over the rim of our neat conclusions. Since meaning is a mental construct and not a property of reality itself, a wider and deeper exposure to life requires stronger commitment to our conclusions, a degree of emotional investment in their truth that can hold them in place despite serious erosion of their credibility. A conclusion that persists only (or mostly) because we need it to be true is called a belief.

Both science and spirituality are committed to investigative methods that subject belief to the scrutiny of actual experience, whether by means of controlled experiments or meditative disciplines. In that zone between, however, where the tribe, its deity, and the socially conditioned ego conspire to promote and defend our beliefs, meaning becomes fairly quickly outdated. The lack of experiential support and this rapid recession of relevance then call for more commitment to keep everything in place, until we reach the point where our emotional dependency on things being just this way makes us forget that we have been pretending all along.

Over time – years and decades for the individual, generations and centuries for the tribe – beliefs slip out of sight and gradually become the unconscious assumptions of our worldview. Instead of the fresh answers to questions they once were or the emotional investments they later became, these assumptions are now carried along (from sumere, to take up) as the mental filter that screens out not only contradictions and discrepancies to what we believe, but the present mystery of reality itself.

When religion lost its roots in mystical experience and the spiritual reflex of wonder, its ostensible purpose was altered, from waking human nature to the grandeur of existence and our evolutionary ideal as a species, to perpetuating former revelations and keeping believers comfortably asleep. What probably started as a celebration of existence and communal participation in the cycle of life and death eventually became a bastion of security and a program for getting out alive. Today its deepest assumptions are grossly incompatible with the present discoveries of science and spirituality, and its convictions – where emotional commitment to belief is so extreme as to make the mind a prisoner (convict) to its own absurdites – are pushing us to the brink of self-destruction.

The way forward begins right where we are. It is time to wake up.

2 thoughts on “The Lullaby of Belief”