My aim in this post is to offer an understanding of religion that can help us appreciate its importance while providing criteria for constructive criticism. Many today are applauding the decline of religion as a necessary precursor to our postmodern “enlightenment.” Religion is based in superstition, organized around power and privilege, corrupt at the deepest level, bigoted, narrow-minded, and prone to violence.

If I happen to agree with every one of those charges, why would I care to offer any kind of defense of religion? I want to be clear that I will not be defending any particular religion, but religion itself – the function it is meant to serve in society and in the evolution of humanity. The question of whether religion might continue to serve this function or if its time has passed will be left to the reader’s opinion. Here at least is how I see it. 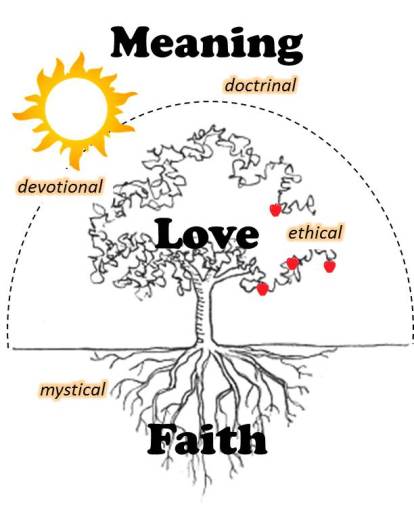 The above diagram carries forward the main idea of a previous post (http://wp.me/p2tkek-ku), proposing a view of the human being as an ascending axis through three centers of consciousness. Corresponding to the gut-level is our concern for security. I call this the elementary dimension, as it has to do with our basic life support and survival as living organisms. Our nervous system sets the internal state of our body according to signals from the environment that indicate providence or negligence in reality. Consequently we will carry a visceral state of calm or distress, relaxed attention or high alert, faith or anxiety.

Religion begins – or at least it once began – in this deep visceral response of faith to the gracious support of a provident reality. This is not a conscious decision or even a voluntary act, but an intuitive and spontaneous release in the autonomic nervous system to the grounding mystery of being itself. The etymology of “religion” (re + ligare) refers to something that ties back, re-connects or holds together what is or might become separated. In this case, the developing self-consciousness of an individual finds a link back into the deep support of reality.

In religion, such practices as centering prayer and meditation cultivate this descent into the present mystery of reality (also called the real presence of mystery). This is the mystical path, and no genuine religion can get started or stay healthy without it. Mystical faith should not be confused with the distinct beliefs that identify the different “faiths” or faith traditions. It is not about definitions or statements of orthodoxy. Since the experience of God and not beliefs about God is the primary concern at this level, mystics are frequently persecuted in religions that over-value theology.

As religion develops and consciousness ascends from its grounding mystery, the concern shifts from security to intimacy. As things naturally tend to go, a provident reality during infancy (and earlier in the womb) translates into secure bonds of protection, nourishment, and reciprocity with our higher powers. This moves us from (but not out of) the elementary and into the ethnic dimension of our human experience.

The science of interpersonal neurobiology is revealing just how important these intimate bonds are to our emotional development, particularly as it involves the “entrainment” of the infant’s right hemisphere to that of its mother. In this way, her emotional composure and caring presence – in short, her faith – train a matching state in her child. As time goes on, the child adores (gazes longingly at) the mother and imitates her behaviors with its own. She is serving as the child’s supreme higher power and devotional ideal.

Every religion orients its devotees on a deity of some sort, which is a representation in story, symbol and art of the community’s focus of worship and aspiration. This relationship is understood and encouraged as interpersonal, even without direct evidence of the deity as a separate personality. References in scripture and sermons to “who” god is, how god “feels,” and what god “wants” reinforce this idea of religion as a mutual exchange – of our worship, obedience, and service for God’s protection, blessing, and prosperity.

My particular interest in this devotional path has to do with the way it elevates our focus to the salient qualities or virtues of the deity. Much as a young child gazes upon its mother and emulates her in attitude and behavior, so the perfected virtues of the deity are first glorified, then obeyed (i.e., imitated), and finally internalized by the devotee.

A study of religion in this regard will reveal how consistently an advancing virtue such as forgiveness is first attributed exclusively to god, then commanded of believers, and at last awakens in them as a more or less spontaneous expression of the human spirit. This transition might be represented metaphorically, as it was in Christianity, by the internalization of the deity – in this case, the risen Jesus who indwells a believer.

If this apotheosis (becoming more like god) begins in devotion, it must eventually work its way out in new behavior, in the way believers conduct themselves in the world and toward others. This is the ethical path, which moves us out of the sanctuary and into the street. Ethics is about responsibility, following through on commitments and holding values with integrity. It’s not only about intention and effort, but looks to the consequences of action to determine its virtue. Whether or not you feel like helping your neighbor or forgiving your enemy, it is the right thing to do because it builds and repairs human community.

The ethical path, then, ties us back to others and our shared context. It is where the “fruit” of our faith and love show up as patience, kindness, and peaceful resolutions. Jesus said that the inner character of a person will be evident in the “fruits” of his outward behavior. It’s not what a person says or even believes, but what she does that really matters, especially when no one is watching or keeping score. Healthy religion promotes greater responsibility for oneself – contrary to the popular notion of “giving everything over to god” – as well as a heightened conscience into the impact of one’s actions on others and the environment.

In the very next moment following our experience of the grounding mystery, our mind is busy trying to make sense of it. By stitching together metaphors, analogies, concepts and associations, it constructs meaning around an essentially ineffable (word-defying) reality. The vaster web of meanings that we spin across our lives and thereby make them “mine” is called a world. I have one, you have one, and in many places our two worlds touch and overlap. But they are different as well – and importantly different, as each world revolves around our individual identities (i.e., our separate egos).

All the while that our nervous system is calibrating to the provident nature of reality, during the early years as we aspire to the personality models of our parents, and farther out into the life roles and responsibilities of adulthood, we are mentally engaged in constructing our (hopefully) meaningful world. What we think and believe is not entirely self-determined, however, as we carry the collective worldview of our tribe and culture as well.

In religion, the doctrinal path is what connects and re-connects our construct of meaning into a lively dialogue with others. Our definition of God, for instance, is nothing like a literal depiction since God is a mystery that cannot be defined. Its purpose is to serve as a common sign in our shared dialogue concerning ultimate reality, a kind of placeholder in language for something we cannot directly point to. As long as our definitions are compatible, we proceed on the belief that we are talking about the same thing (which is really no thing).

But there comes a time – for me it came during my early twenties and then again in my mid-forties – when the meaning of life and our definitions of God feel inadequate and contrived. I suspect that these are phases when the “habit” (as in the costume of a monk or nun) of our world doesn’t fit like it once did. It loses relevance or currency; the seams split and the hem starts to fray. Life can begin to feel boring or flat (as in two-dimensional) and the agreements that earlier made for overnight conversations now put us to sleep. What’s the problem? Paradoxically, too much meaning.

Religion starts to fail when its language about God (theology) in no longer translucent, that is to say, when the words, doctrines, and theories are taken literally instead of as names and allusions to a present mystery beyond meaning. Twenty-somethings and mid-lifers are especially sensitive to the light going out in religion. While everyone else is squinting their eyes or squeezing down on the fading glow, these individuals are wanting to update the glossary and get back to experience.

If there’s hope for religion, if there’s a chance for religion to be healthy again, then it will need to respect these iconoclasts (image-breakers) and return to the place where it all started. At least this much can be said: healthy religion is mystically grounded, devotionally focused, ethically engaged, and doctrinally relevant.

So what’s your preferred path? What voice do you bring to the conversation? More importantly, what are you waiting for?