Religion is an answer to the problem or dilemma that besets our human condition. Throughout its long history, the answer of religion has changed according to the nature of its problem.

Earliest religion was focused on the body and a need for the business of society to stay connected to the provident rhythms of nature. It was ceremonial, meticulously ritualized, and dedicated to synchronizing cultural activity with the urgencies, cycles and seasons of life. In its elaborate productions culture spends the energy that nature provides, requiring regular refreshment to continue.

The dilemma or problem, then, had to do with the fact that culture is not a renewable resource. Despite its impressive production output, societies continue to depend on the life energy and raw materials of the planetary environment. Living off the land and taking the life of other animals for food made our earliest ancestors keenly aware of the need to respect this balance, cooperate with nature, and repay a portion by ritual offerings and sacrifices.

In time, the focus shifted to more socially unique concerns like security, membership, identity and purpose. Thus arose a religion of the ego. If life energy is drawn up from the animal nature of the body (and from the greater “mother nature” of our planet), then ego is where a large amount of this energy is expended. Pursuits of security and recognition, property and status, quickly exhaust themselves. They are not replenishing cycles but more like straight lines losing strength and trailing off in the hopeful pursuit of “enough.”

As the personality is chronically stressed by discontentment, eventually the ego fastened on a marvelous fantasy – that one day a clean escape would be made, leaving behind the mortal burden of the body and accomplishing at last a perfect state of everlasting security. What we can call “ego religion” is focused on artificial life, not natural life; on a life that is unnaturally extended along a straight line that never ends. Its fantasy is of a disembodied and entirely metaphysical existence, reunited with a “heavenly father” after a painful and frustrating sojourn with “mother nature.”

Ego religion tends to be denominational (heavily invested in the tribe and its tradition), proselytic (focused on conversion and recruiting members), moralistic (enforcing rules on how one should live), and gnostic (upholding and defending certain doctrines as necessary to salvation). As a program for resource management, social cohesion, and mind control it can’t be beat. While it demonstrates little sacred concern for nature and the body, vestiges of earlier (nature) religion persist in its holy days (holidays) coinciding with solstices, moon phases, and seasonal transitions.

What raises the concern of many today is not so much that ego religion is all those things just mentioned, but that it pushes an agenda of escape, disassociation from the body and nature, and departing to a better place. How long can it go on, where we use up the resources of one location and abandon it for the next? How much longer can we continue to generate stress – perhaps the one renewable resource of culture – and multiply the diseases of body and mind?

How long, really, can we live as “souls inside bodies,” waiting in patient hope or hastening the day when we shall be set free from this prison house and rewarded in heaven for being good and getting it right?

So that is the problem of our human condition today. The fall-out of this divided life of ours – suppressing, craving, consuming, wasting and leaving – makes coming back not only less and less appealing, but over time less and less possible. The irony is that, while religion might offer an answer to this problem, religion is itself a major cause of the problem. The vision of a scorched and lifeless landscape contained in some of its apocalyptic myths is slowly (but less slowly) becoming our self-fulfilling prophecy.

If religion is to offer an answer to the dilemma of our human condition, then it will be a call to return. Interestingly enough, this is the literal meaning of the familiar word “repent.” In this case, it’s a call to return to what we have been trying so hard to leave behind – the earth, nature, our bodies, and the burden of mortality.

This is what I am calling “soulful religion,” which is not a religion about immortality, metaphysics and the afterlife, but rather of incarnational living, creative community, human fulfillment and planetary well-being.

In fact, it seems to me that this has been The Way of Salvation from the very beginning. During the long winding diversion into metaphysics, escapism and redemptive violence, a few brave lights did emerge from time to time. They spoke of life HERE, love NOW, and of liberty beyond the confines of tribe, tradition and orthodoxy. It didn’t go well for many of them.

Ironically (again) the very crusaders who persecuted and stamped out these light-bringers later memorialized and venerated them in their churches. But not until the story could be rewritten and the savior remade into a drop-in rescuer, a god in disguise, or a scapegoat for sin. (Jesus was made into all three.) As Bible scholarship is able to do its business outside of denominational publishing houses and unmotivated by religious convictions, the emerging picture of the “historical Jesus” is looking less and less like the Savior of Christendom.

In a time when many are asking about truth in religion and the way of salvation, we need to consider this possibility. It’s not that one religion is true while the others are not; or that all religions are true in their own way; or that religion itself is nothing but superstition and lies.

Rather, the religions are like squiggly lines moving across history, each one a meandering path through the landscape and time zones of our collective human experience. Most of the time, a given religion is busy working out its metaphysics, redefining its membership, getting back to fundamentals, or accommodating itself to the larger culture. 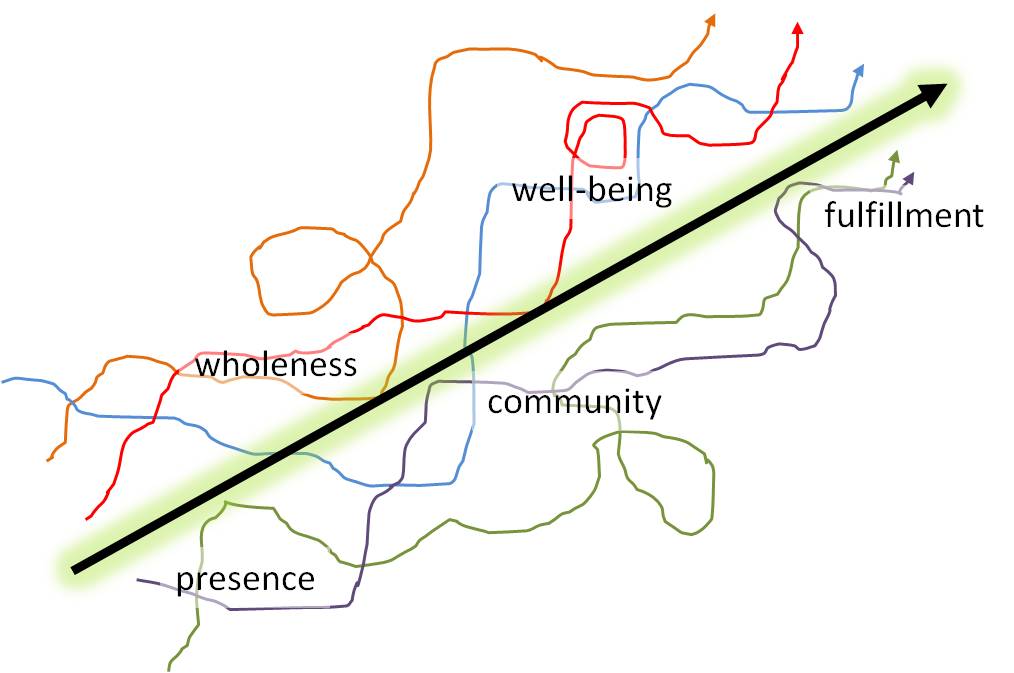 But once in a while, the squiggle takes a turn and comes very close to the invisible guideline of fulfillment, wholeness, well-being and genuine community – to the greater wisdom and higher ideal of our own human nature. The light goes on, fear drops away, love opens out, and peace settles in. For this brief moment, as it aligns itself to The Way, a religion can be said to be true.

And in the next moment, as this truth gets defined, professed, and defended as the “only way” to god or heaven or life everlasting, it just as quickly veers away and falls off course. In some eras of history – and maybe we’re in one now – it’s possible that all religions are squiggling off in the distance, while just a few individuals around this whole planet – and maybe you’re one of them – are waking up and stepping quietly on The Way.

6 thoughts on “The Only Way of Salvation”