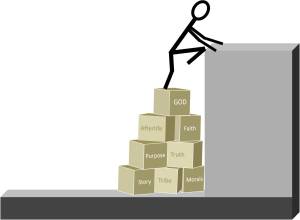 Religion is to spirituality as meaning is to mystery, as god is to ground, as belief is to faith, and as body is to soul – if we can resist the old habit of making the second term of each pair into some separate and metaphysical “thing.” These pairs are paradoxical, not antagonistic or merely “coexistent.” Spirituality finds “body” and expression in religion, not inside it but as it. Faith as release to the grounding mystery of existence is translated and becomes “useful” as timely (relevant) and meaningful belief.

Misunderstanding and complications arise at the very start (or shortly thereafter), in our impulse to label and define what is essentially unnameable. When that happens, mystery becomes (is turned into) just another name for what we don’t understand – yet. Faith becomes Christian, Muslim, or Buddhist faith, then “the” (one true) faith, which really means the set of beliefs that is supernaturally revealed or fully enlightened.

God is a name, an idea, a representation of something that isn’t a thing. The ground does not “stand out” (ex-ist) in the field of identities and relationships, but is merely another name (a metaphor in this case) for that out of which everything else stands, and back into which it will all eventually return. That grounding mystery is experienced in those moments when you can let go of meaning, let go of thought, and let go of “me.”

Faith is yet another name, a noun that is really a verb, a way of be-ing and living in communion with the present mystery of reality.

As I have tried to explain post-theism, some have heard me advocating for a new kind of postmodern atheism. It sounds to them as if I’m rejecting god and wanting to discredit religion as so much mythological literalism and metaphysical malarkey. There is that. But at its best, religion can be a helpful servant to spirituality, and god can be a relevant representation of the grounding mystery. The problem is that religion is not very often at its best.

You can’t resolve the errors in religion by digging deeper into its scriptures and refining its doctrines. It’s not about clarifying your concept of god, or making it “big” enough to contain all the attributes that a perfect and supreme being should properly have. No matter what you might try on that side of the threshold of the paradoxes mentioned above, you are still only straightening up and rearranging boxes.

Spirituality comes before religion, though not in the temporal sense of “before.” It inspires (breathes life into) religion, but it can’t connect to your life without the “system of utilities” that religion provides. In religion god is useful for making the world, providing for our needs, giving us purpose, supervising our progress in morality and settling the score at the end. God can become so useful, in fact, that we lose sight of his/her “first use,” which was to re-present the mystery and give us a way of relating ourselves meaningfully to it.

Religious formation can be thought of as the development of a “vehicle” for the evolution of human spirituality. As life evolves through the adaptation of an organism to the conditions and challenges of its environment, so does spirituality evolve through the ability of religion to stay grounded and adapt to the changing circumstances. “True” religion – if I dare use the term – is one that is spiritually rooted in the timeless mystery and usefully current to the concerns of our time.

While religion has a thousand uses for god, spirituality has none. It should make sense by now that I am not arguing for atheism. Indeed atheism and its “opponent,” theism, are both on the religion side of things. Together they constitute a warring dualism rather than a creative paradox, as they both (at least in the context of their debate) effectively ignore the grounding mystery that cannot be named (or unnamed). I see religion and religion’s god as very useful, but they are not ultimately the concern of faith.

As the developmental vehicle of human spirituality, religion began with the question, “What will we name this mystery, and what does it mean to us?” Through the course of its long history, religion has been very busy – naming, mythologizing, coordinating, instructing, sanctioning, authorizing, proselytizing, defending, condemning, justifying abuse, violence and exploitation in the name of its god. Many, many people have left religion because of its violations of ethical sensibility, its sometimes ruthless control tactics, the way it tries to motivate conformity through fear, and its frequent dismissal of reason and rational inquiry.

Although I strongly support anyone wanting to get out of a corrupt and abusive religion, it’s not this corruption that presses me to explore the promise of post-theism. As long as identity is our preoccupation and ego is controlling the game, we will continue to see dogmatism, bigotry, and violence in our religions and across the cultures. I suppose that some of the more articulate and outspoken atheists really just want to remove the baby so we can throw out the bathwater.

Post-theism doesn’t really care about denying or defending god, however. Instead it is interested in spirituality after religion – but not temporally after, since spirituality will always need embodiment in and as religion. The “after” here is more about the intention and developmental aim of religion, in the way it directs the deeper experience of spirituality into the utilities of daily life. And then what? For what purpose?

I would say, for the purpose of providing a springboard for a leap back into mystery. Beliefs must be dropped, religion must be transcended (gone beyond), and god must be left behind. We cling to our god with the same energy that we defend our ego. Religion assists in the formation of ego by projecting its god as counterpart and ideal. At some point – and I am arguing, we are at that point right now – we need to be strong enough to leap beyond even ourselves, into the grounding mystery.

We are standing now on a vantage-point at the far end of an arc through time. Religion, tribe, ego and god have been useful in getting to the point where we can now look back – and down – through this complicated formation and discern a light shining up from below.

As paradoxical as it sounds, we must arrive at the point again where we have no use for god.

2 thoughts on “No Use for God”