In Would Jesus Join a Church? I reminded my reader that Christ was not Jesus’ last name, nor is it a title that belonged exclusively to him. We should think of it rather as an archetypal designation for one who has been “anointed” – ordained and commissioned to carry out the will of god. An actual ritual of anointing would mark and confirm the individual’s dedication to this higher purpose, which in the context of ancient Israel followed a political, priestly, or prophetic path.

The early Christians believed that Jesus fulfilled all three lines of expectation.

As an archetypal fulfillment, Jesus the Christ occupied a similar role as did Gautama the Buddha for his people. In the way that Christ identifies one “anointed” by a higher purpose, Buddha designates one who has “awakened” to the true nature of things. The historical Gautama had tried in vain to find this truth both in the luxuriant pleasures of palace life and in the acetic practices of self-denial, before he discovered the middle way of inner peace.

The Buddha’s followers continue to regard him as the pathfinder to the deepest truth of existence.

Many others have explored the similarities of “Christ consciousness” and “Buddha nature,” but in this post I will focus on how they are distinct. The archetypes clearly reveal our human fascination with higher purpose and inner peace – ideals that help us see beyond the thick tangle of anxieties and distractions that is ordinary life in the world.

Instead of interpreting them as cross-cultural equivalents, however, I want to suggest that the Christ and Buddha archetypes are complementary, and that only together do they offer a complete picture of human fulfillment and the liberated life. 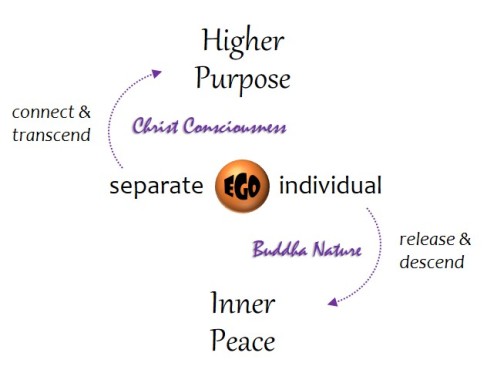 Let’s get our frame in place. At the center of my diagram is the star of our show: the separate individual of every ego. From Latin for “I,” ego simply names the center of self-conscious identity which gradually comes into shape as a social construct over the first decade of life. The tribe uses this construct of identity as a brake on selfish and anti-social behavior, as a steering mechanism for behavior more suitable to polite society, as well as a repository of all kinds of cultural codes and tribal secrets.

In other words, ego will always have a social context where it is defined and belongs.

As a separate individual, ego had to undergo a series of separations from earlier conditions of immersion and attachment. Physical transitions from fetus to newborn to infant to toddler are accompanied by emotional shifts, role changes, mental distancing, and new attitudes that serve to orient identity in its social world. Each separation amounts to a No (“not me”) that enables ego to retract or advance into its own, what we might call, negative space.

Separation also entails exposure – slipping out, pushing off, stepping away, and standing alone – which brings on some insecurity since standing alone can feel a lot like abandonment. To compensate, ego grabs on (physically and emotionally) to something else, a pacifier of some sort in which it seeks comfort, safety, and relief. With this Yes it identifies with the pacifier, making it part of its identity. Literally anything can serve as a pacifier, becoming an attachment to our sense of self.

All of these facets and layers of construction – each one a kind of identity contract – make the ego an individual, a unique and indivisible person. Every facet and layer of identity is essential to the construct: “I [ego] am a white middle-class American male who leans politically as a Democrat and spiritually as a Christian post-theist.” Because my construct of identity is made up of all of these, subtracting even one would alter who I am. A challenge or threat to any of them will be regarded as an attack on my very self.

If the facet or layer of identity under threat happens to be where my security is hooked, I will snarl and snap – or run if I have to.

So, every ego is a separate individual made up of many Noes and Yeses. By “No” we separate from one thing, and by “Yes” we identify ourselves with another. After a while we are so attached and entangled, that our human spirit – the part of us that longs for inner peace and higher purpose – paces hopelessly in circles like a wild animal in a cage.

As illustrated in my diagram, I’ve come to appreciate the distinct ways that the Christ and Buddha archetypes provide us a way out of the cage and into the liberated life.

The higher purpose of Christ consciousness is what’s revealed to us as we are able to move from separation to connection, and then transcend (or go beyond) the duality of the connection into a greater whole. In human interpersonal connection (one ego to another) there will be an emergent invitation for partners to become a genuine community, where the higher purpose of their relationship inspires and guides their interactions.

This principle of connect-and-transcend is Christ consciousness. In devoting himself to the higher purpose of radical inclusion and taking for his mission the liberation of all people, Jesus became the Christ (anointed one).

The inner peace of Buddha nature lies below the individual ego, recalling that the ego’s “indivisibility” is not about being a single thing, permanent and immortal. Rather it is a construct made up of numerous identity contracts, storylines, and characters – all those facets and layers mentioned earlier – which all together make us who we are. The path to our inner life, into what I call the grounding mystery of being, entails a contemplative release of each facet and layer as we descend deeper into that mystery.

As Buddhism teaches, this inner peace is not an experience for the ego, but is rather an “egoless” experience. From the vantage point of personal identity it is emptiness (shunyata), no-thingness, pure awareness unattached to (free of) any self reference. “I” am not having this experience of inner peace; it opens to consciousness only as I let go of everything that makes me an individual.

This complementary principle of release-and-descend is Buddha nature. In dropping through his web of personal identity and dwelling in the perfect stillness of being-itself, Gautama became the Buddha (awakened one).

These archetypal principles were revealed (or if you prefer, expressed) in the historical Jesus and Gautama, in very different cultures and times. What they revealed, however, was not to be tied exclusively to those individuals – each said so in his own way. By their examples and through their teachings, the liberated life was manifested as the way of inner peace and higher purpose.

Perhaps it’s significant that Gautama came first, since we need to be at peace within ourselves before we can clearly see the creative purpose moving through all things.