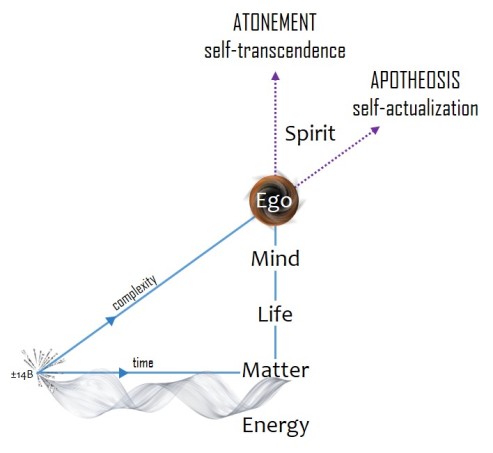 After leaving Christian ministry as a church pastor my journey has taken me deeper into the frontier of post-theism, and it’s been my new “calling” since then to clarify the meaning of this emergent form of spirituality. I have worked hard to distinguish post-theism from its progenitor (theism), as well as from its much younger sibling (atheism) who seeks to discredit their parent and be done with the whole family affair.

Even as a church pastor I was intrigued by the mythology of early Christianity, which was inspired no doubt by the historical disturbance of Jesus himself, to be later developed by the likes of Paul and the four Evangelists into a story of world-historical and even cosmic scope. Intuitively I sensed that the story was not really about long-ago events or faraway places, despite what my denomination and its theological tradition wanted me to believe and preach to the congregations I served.

Maybe I didn’t need to get out of church in order to find the deeper truth of Christianity, but it certainly helped.

Outside the imaginarium of stained-glass windows, vestments, liturgies, rituals, and hymns, the transforming effects of its originary experience coalesced for me in a singular revelation. It was – and for now we have to speak in the past tense since both popular and orthodox Christianity have all but lost their sightlines to the source – not about being saved from hell or rescued to heaven, pleasing god and getting our reward.

All of these negative and positive incentives hook into something without which they would have no power. It’s not that we had to wait for modern science to demythologize the underworld and outer space, or for anthropological studies to expose the historical origins of religion before we could let go and move on. Their hooks are in us, quite independent of whether and to what degree we may be children of the Enlightenment.

In my investigations into the development of religion through the millenniums of human history, it struck me that its three major paradigms – classified as animism, theism, and post-theism – are each centered in a distinct dimension of our human experience.

Animism is centered in our animality with its immersion in the fluid forces of nature, life, and instinct. Theism is centered in our personality and particularly involved with the formation and maintenance of ego identity in the social context. And post-theism – that latter-day evolution of religion “after god” – is centered in our spirituality, where we begin to cultivate the grounding mystery of our existence and live in the realization that all is One.

My objective in this blog has been to show how theism prepares for the emergence of post-theism, and where alternatively it gets hung up, spinning out more heat than light. We happen to be in the throes of that dynamic right now, as the paroxysms of pathological theism – in the forms of fundamentalism, dogmatism, terrorism, and complacency – multiply around us.

With all of this in view, it’s tempting to join the chorus of atheists who are pressing to extinguish theism in all its forms, or at least to ignore it in hopes it will just go away.

But it won’t go away: another recurring theme in this blog of mine. Theism has a role to play, and pulling it down will not only destroy what core of wisdom still remains, but also foreclose on a flourishing human future on this planet by clipping the fruit of post-theism before it has a chance to ripen. This fruit is what I call genuine community.

Theism evolved for the purpose of preparing the way for genuine community, although its own inherent tendencies toward tribalism, authoritarianism, and orthodoxy have repeatedly interfered. This is just where the struggle for post-theism will make some enemies.

Returning to my autobiographical confessions, over time and with distance I came to realize where it is that Christian post-theism emerges from Christian theism, and it is precisely where Jewish post-theism emerged from Jewish theism. One place in particular where a post-theistic breakthrough in Judaism was attempted but ended up failing was in the life and teachings of Jesus.

This failure eventuated in the rise of Christian theism (or Christianity), which made Jesus the center of its orthodoxy, though not as revealer of the liberated life but rather the linchpin of its doctrinal system.

Just prior to the point when the early ‘Jesus movement’ was co-opted and effectively buried (for a second time!) beneath layers of dogmatic tradition and ecclesiastical politics, the apostle Paul and the four Evangelists had grasped the energizing nerve of Jesus’ message. Immediately – or rather I should say spontaneously, out of what I earlier called an originary experience – they translated its transforming mystery into metaphorical and mythological meaning.

Whether they borrowed from the cultural store of symbolism available at the time or brought it up from the depths of their own mythopoetic imaginations (which is really where the shared store originates), these mythmakers of earliest Christianity employed images of divine adoption, virgin birth, heroic deeds, resurrection, ascension, and apocalypse, lacing these into the Jewish-biblical epic of creation, exodus, Pentecost, promised land, and a future messianic age.

The product of their efforts was indeed vast in scope and deeply insightful into what in my ministry days I called “the first voice of Jesus.”

As briefly as I can, I will now lift out of that early mythology the kernel of Jesus’ message, focusing his intention to move Jewish theism into a post-theistic paradigm. Although it largely failed with the rise of orthodox Christianity, there’s still a chance that we can pick up his cause and work together in realizing his vision of genuine community.

Very quickly, my diagram illustrates an extremely compressed time line of cosmic history, starting with the so-called Big Bang nearly 14 billion years ago, and progressing by stages (or eras) from matter to life, from life to mind, and in this last second of cosmic time, from sentient mind to the self-conscious center of personal identity that you name “I-myself” (Latin ego).

As the picture suggests, the story doesn’t stop there, since the formation of ego is intended to connect you with others, serving also as the executive center of self-awareness and your uniquely personal aspirations.

The formation of an individual center of personal identity creates the illusion of separateness – that you and another are separate individuals. There is truth in this illusion, of course, in that you are in fact not the same person but two different persons with your own experiences, feelings, thoughts, and desires. This illusion of separateness is what post-theism seeks to help you transcend by making you aware that it is an illusion, or in other words, a mere social construction of identity.

Self-transcendence, then, does not mean ripping down the veil of illusion, but rather seeing through it to the higher truth of unity beyond your apparent separateness. That is to say, your separate identity is affirmed in order that it can be used to support your leap beyond it and into relational wholeness (or at-one-ment).

It is critically important to understand, however, that in genuine community otherness is not subtracted or dissolved away, which would leave only an undifferentiated ‘mush’ and not the dynamic mutuality you are longing for (according to post-theism).

Hand in hand with this theme of atonement is another page from the teachings of Jesus and post-theism generally, which goes by the name apotheosis (literally a process of changing into [the likeness of] god). This is not about becoming a god, but expressing out of your deeper human nature – which according to the Jewish myth was created in the image of god (Genesis 1) – those virtues whereupon genuine community depends and flourishes.

Compassion, generosity, fidelity, and forgiveness: such are among the divine virtues that theism elevates in its worship of god. Apotheosis is thus the ascent of self-actualization by which these virtues attributed to god are now internalized and activated in you, to be carried to expression in a life that is compassionate, generous, faithful, and forgiving.

This is another way, then, of pulling aside the illusion of separateness in which personal identity is suspended.

My depth analysis of early Christian mythology thus revealed two profound thematic threads reaching back to the first voice of Jesus. From inside theism and beneath the picture-language of its mythology, god is apprehended as both Other and Ideal. As Other – or more precisely, as the divine principle of otherness – god represents the irreducible interplay of one and another in genuine community. And as Ideal, god is the progressive rise of those deep potentials within each of us, surfacing to realization in the higher virtues of genuine community.

In early Christian mythology (found in the extended Gospel of Luke called the Acts of the Apostles) we are presented with the symbol of Pentecost, as the transforming moment when the Holy Spirit (or the risen Jesus) comes to dwell within the new community, which Paul had already named the Body of Christ. From now on, the life of this new community would be the communal incarnation of god on earth.

Had it taken root, the ensuing adventure would have marked a new era of spirituality, on the other side of – but paradoxically not without or against – god.

Jesus himself envisioned this in his metaphor of the kingdom of god – or more relevantly, the kindom of spirit. In truth we are all kin – neighbors, strangers, and enemies alike. All is One, and we are all in this together. Good news indeed!

3 thoughts on “Christian Mythology Through A Post-theistic Lens”