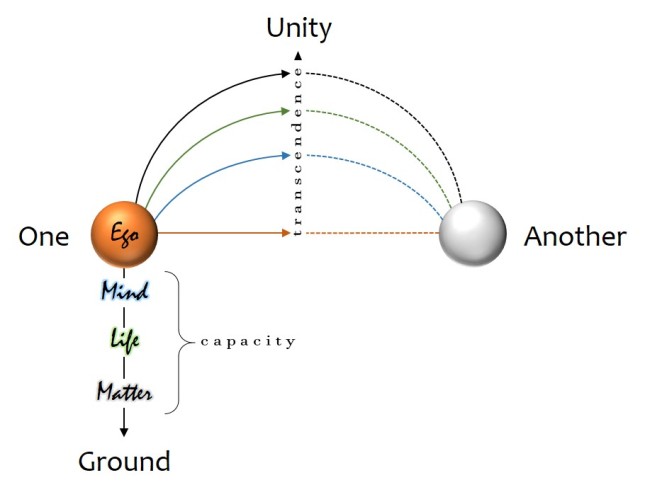 Now that you’ve completed the major work of becoming somebody – (I realize it’s an ongoing project and that construction may be stuck in a phase right now, but let’s pretend anyway) – the question of what’s next needs your attention.

Of course, popular culture wants you to believe in yourself as an end-game: the highest goal and most significant achievement of a human career. From this point it’s nothing more than some ongoing identity maintenance, love-and-power struggles on the field with others like you, getting the most out of the time you have left, and maybe securing a forever home in heaven when you die.

In other words, stop asking.

To the extent that it has signed a deal with popular culture, religion plays right along. The doctrines of a personal deity, personal salvation, and personal immortality have conspired to create a veritable personality cult, with ego its focal obsession. It needs to be said straightway that this was not religion’s preoccupation for the longest time, when the primary concern was about linking personal identity to a deeper, larger, more enduring, and transpersonal reality.

In other words, it’s not all about you.

In the interest of moving our conversation out of the sticky web of orthodoxy, I want to put ego and personality in proper context. The evolution of personality and its executive center of identity is a very late achievement in the history of homo sapiens. Actually its deeper prehistory charts the development of early hominid species, while the emergence of a self-conscious personal identity marks the formal beginning of our own unique line.

Our history since its emergence has been characterized by all the predictable complications that attend an experience of separation, exposure, insecurity, and alienation.

In other posts I have explored how insecurity drives neurotic attachment and unrealistic expectations, which in turn lead to inevitable disappointment, deepening resentment, and finally existential despair. Along the way we are compelled to compete for what we need, pick fights with others, and grab for ourselves whatever we hope will make us happy – which nothing can, so we’re doomed.

In order to break past this vortex of consumption, let’s try to open our frame wide enough to get all this nervous futzing in perspective. My diagram positions you (“One”) in relation to “Another,” where the other might be anyone or anything at all. As our task here is to better understand how a self-conscious personal identity fits into the bigger picture, we’ll begin our reflections at that level.

Across from you, then, stands another more-or-less centered personality, with many of the the same quirks, hangups, and ambitions as you. This is properly the interpersonal plane of engagement, with your relationship carried in and complicated by the reciprocal influence of each of you on the other, and upon both of you by the general role play of society along with your respective family inheritances.

Purely on this plane, your mutual concerns have to do with identity, recognition, agreement and belonging. If we imagine a horizon including both of you in this interaction, it would only be large enough to contain your unique and shared interests as self-conscious persons.

If your self-identification is fully represented inside this interpersonal horizon, then nothing else really matters. It’s you and another, working out the meaning of life in your mutual struggle to be somebody.

But as my diagram shows, your center of self-conscious identity (i.e., your ego) is only the surface manifestation of a much deeper process. Supporting personality from farther below is a sentient nervous system managing the flow of information from your body’s interior and the external environment. This is where the feeling of what happens is registered.

You are not only a person on a uniquely human social stage, but if you can release those concerns for a moment and become more mindful, you’ll find suddenly that your horizon of awareness opens by an exponential degree. Now included are not just human egos but all sentient beings – all other creatures that sense, desire, respond, and suffer. Notice how dropping down (or deeper within) to identify yourself as a sentient being opens your capacity to identify with other sentient beings.

This was a fundamental insight of Siddhārtha Gautama, later named the Buddha (from budh, to wake up) for his breakthrough realization.

Each subsequent drop to a deeper center, then, opens a still greater capacity of awareness, compassion, and goodwill on behalf of others like you. This inward descent corresponds to a transcendence of awareness through larger and larger horizons of identity – from interpersonal (ego), sentient (mind), and organic (life) communities, until it opens out to include the material universe itself.

Lest we leave you out there floating weightless among the galaxies, our reflections can now return to your regard for and interactions with that other person. With your enlarged sense of identity as (quite literally) a personification of the universe, you are also witness to this self-same miracle in the other. Their true identity so radically transcends the masks, roles, and role plays defining who they are, as to lie almost entirely beyond their ability to imagine or accept.

The other person’s enlightenment in this respect may seem utterly improbable to you. And yet, you managed to get over yourself and see the truth – did you not? What would happen if you both came to see the truth and started to live your lives with this higher wholeness in mind? How would it change what you care for, what you worry about, what you chase after, or what you hide from?

In realizing that you are not separate in fact but only seem so by the delusion of ego consciousness, your next thought, your next choice, and the very next thing you do might serve as a light in the darkness, illumining the path of a liberated life.

Maybe others will join you, or maybe you’ll walk alone for a while. And then again, it’s impossible to be alone when the universe is your home.

Posted by tractsofrevolution on December 11, 2018 in Philosophical Underpinnings, Post-theism/New Humanism, The Creative Life

One response to “One to Another”