RSS
← A Father’s Heart
The End of Religion →

Journey Back to Reality 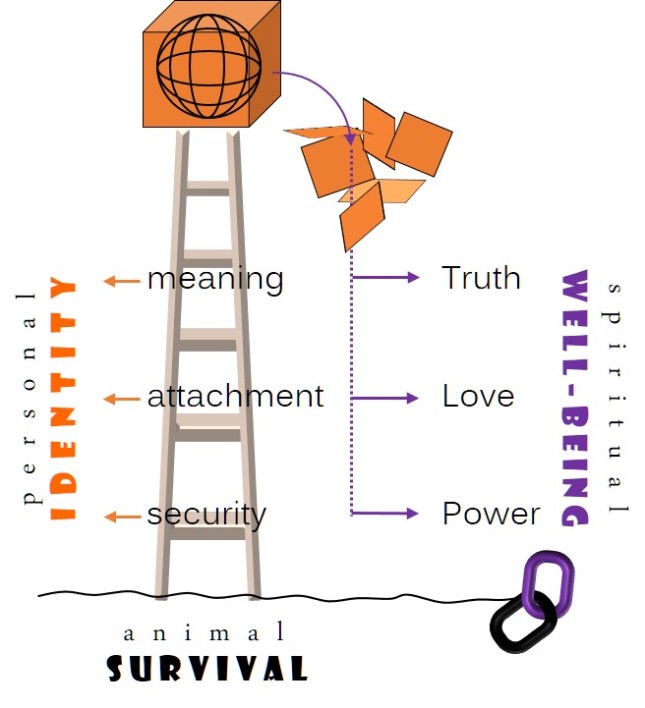 Just as soon as I make a case for the necessity of religion, it’s time to insist on our need to transcend it. If my atheist friends squirm at my insistence that we all have a religion – a system of beliefs, attitudes, values and practices that links the separate ego back to reality – my friends who are believers will shake their heads at my suggestion that we need to leave it behind. Why take the time to defend religion (not one or another religion, but religion itself) when the point is to go beyond it?

A popular notion of religion conceives it as a means to an end, as a way through this world to another one. We trust that our religion will answer those really big questions and ultimately save our soul when the body gives out and our life on earth is over. Even a slight acquaintance with the history of religion should disabuse us of that fantasy, as the ‘soul rescue’ model came on the scene only very recently and is based on a dualism of body and soul which is probably less than 3,000 years old.

For the greater part of its history religion has focused human concern on the challenges and opportunities of life on earth. Essentially it is about assisting human beings in the evolutionary work of “cultivating faith, nurturing love, and constructing meaning,” of reconnecting to reality and becoming real. Why we might need to become real is more obvious when we understand the extent in which ego formation (the development of a separate center of self-conscious identity) removes us from the spontaneous stream of life experience and from the present mystery of reality.

The rise of personhood and individuality is a slow arc across human cultural history, and religion functions to keep it from detaching pathologically from the mystical (contemplative), ethical (communal), and universal (cosmological) dimensions of our existence. Few critics of religion today recognize just how important it was during the formative stages of human evolution, not to mention how important it continues to be as our destiny unfolds. Just because certain aspects of religion, and even entire religions, may change or disappear as we progress doesn’t mean that religion itself is expendable.

The question is not whether but how ego consciousness today is linked back to the grounding mystery within, to the living community of persons, and to the larger context of life on earth. Does our religion ‘work’ to this extent, or not?

My diagram summarizes the ‘journey back to reality’ that healthy religion is intended to facilitate. The place to begin is at the bottom-right, where looped purple and black chain-links remind us of the essential nature of human beings as spiritual animals. We are not souls in bodies or bodies with souls, but sentient animals with a rich inner life. Our body is oriented by the senses in an extroverted fashion to the physical environment, while our soul opens consciousness to its own inner depths. In the dialogue of inner and outer, mediated by metaphor and story (myth), we perceive the oneness of all things and our place in the order of existence.

Shifting over to the bottom-left and slowly swinging upward in the diagram introduces another piece of the puzzle, in that developing center of self-conscious identity (ego) mentioned earlier. If ‘spiritual animal’ is what we are as human beings, ego identity is a quest for who we are – where we belong, to whom, as a member of which tribe, in what occupation, and so on. Early on, the tribe is most active in shaping our animal nature into a well-behaved dependent – a ‘good’ boy or girl who observes the rules of the game. Certain base impulses have to be restrained, or else channeled in ways that conform to the morality of tribal life.

Our fundamental relationship to the body is established at this stage, as either something we can honor and enjoy, or instead feel unsure and ashamed about.

The first separation in ego formation, then, is a separation of self-consciousness from the sensations, drives, and urgencies of the body. Ideally there is a general sense of security, where the emerging ego feels supported and valued as a member. But even in the well-adjusted individual some anxiety persists around the question (inarticulate at this point) of whether it’s really safe to trust, making security a chronic concern for the ego. We see this, for instance, in the infant that clings to its mother for safety and nourishment, unwilling to let go for fear of not having what it needs to survive. Attachment, then, is how ego compensates for insecurity, by latching onto whatever promises the unconditional support it has lost in the process of separation.

Every ego thus carries an inherent self-contradiction: the separation necessary for establishing its own center of identity amplifies a deep insecurity, which ego then seeks to overcome by attaching to an external anchor – be it mother, family, nation, wealth, status, deity, heavenly reward, or whatever. The deeper the insecurity, the stronger and more desperate the attachment: a condition that interferes with and can completely undermine the process of healthy ego formation. This self-contradiction is usually resolved (perhaps only justified or explained away) by the construction of meaning that our tribe erects around us. As an obedient and honor-seeking member of the group, we should be willing – better yet, eager – to sacrifice everything in service to its idols and ideals.

Insofar as religion can become a closed orthodoxy and a hierarchy of top-down control, it was inevitable that this natural course of human evolution (i.e., the rise of ego consciousness) would generate a crisis – and a worldwide one. Wherever the rising force of personal identity and individual freedom confronts a regime of moral repression and thought control, something needs to give.

It’s important to understand, however, that because ego is inherently insecure to some extent, the framework of meaning it comes to inhabit and defend as its personal world is not wide open to reality, but just as small and simplified as it needs to be. In my diagram, a ladder of ego development leads up into a more or less coherent worldview (symbolized by a sphere) held inside a set of beliefs concerning ‘the way it is’ (symbolized by a box around the sphere). Even a healthy personality, exhibiting the telltale signs of ego strength (stable, balanced, and unified), is separated from reality by its world construct.

We don’t need to demonize the ego and make it the cause of all our trouble, as some world religions have done. The goal of ‘salvation’ (referring to the process of being set free and made whole) is not to cancel or reverse what ego formation has accomplished, but rather to transcend personal identity and reconcile consciousness to reality once again. I say ‘once again’, but in fact the connection this time is conscious and intentional, whereas its pre-egoic state was unconscious and spontaneous.

By definition, nothing is separate from reality, which means that ego’s separate identity is actually (in the words of Albert Einstein) “an optical delusion of consciousness.” This is what needs to be transcended.

Having made our way to the top of my diagram, we can now follow the path of our journey back to reality. To really see things as they are, the veil of meaning that separates us from reality (or to use a related analogy, the mental labels we affix to things and other people) must be pulled aside. What is revealed, then, is perfectly meaningless: reality in all its glory, the pure radiance of being. Truth is always beyond meaning, and our meanings are true only insofar as they accurately represent the way things really are. And yet, even the most accurate representation is still just a representation; the present mystery of reality transcends all media of thought, language, art, and theory. It is ineffable.

When we are liberated from the constraints of belief, prejudice, and unrealistic expectations, other persons can be respected as free individuals rather than as emotional attachments that protect or ‘complete’ us. Such open and sacred regard for others, expressed as empathic care for their health and well-being, is what we call love. Genuine love and community is a dynamic of freedom, trust, kindness, and honesty between individuals. It isn’t ‘blind’ at all, but profoundly clear-sighted. Attachment is what makes us blind to others, regarding them only as we need them to be – how reassured, desirable, important, or threatened they make us feel.

If truth is the way things really are behind the meanings we impose on them, and if love refers to a genuine human connection that is free from neurotic attachment, then power, as the opposite of insecurity, has to do with our conscious connection to the grounding mystery within. Paul Tillich expanded the notion of being (taken as a verb rather than a noun) as ‘the power to be’, interpreting existence (from existere) as the place where reality manifests (or ‘stands out’) in this or that thing.

Much of mystical spirituality might be characterized as an inward descent of consciousness, dropping past the identifications of ego, into the deeper registers of inner life until the wellspring of being-itself is reached.

Our quest for identity sets the stage, as it were, for our journey back to reality. As the quest is our preoccupation during the first half of life, the journey will (or perhaps I can dare say, should) serve as the orienting metaphor for a spirituality of the second half. Yes indeed, we will occasionally get hooked into the drama of ‘me and mine’ – much more frequently than we would care to admit – losing our way time and again. But soul seeks truth, not meaning. It celebrates love, not possession. And it rests quietly in being, in the secret source of power.

Posted by tractsofrevolution on June 23, 2016 in Post-theism/New Humanism, The Creative Life

← A Father’s Heart
The End of Religion →