I’ve decided that my purpose as a writer is not to persuade readers to my position on some topic, as much as it is to inspire (or at least provoke) creative thinking around things that matter. After all, my blog is devoted to contemplating creative change across culture, and persuasion is more about converting others to your beliefs than it is getting them to conduct a reality-check on their own.

So, I want to return to something I wrote about two years ago, and which, in the intervening time, has become even more relevant. It has to do with the paradoxical tension between two great systems that interact in every culture, in every community, and in each one of us. Our fear of conflict, which is probably fueled by ignorance concerning the creative potential in tension, along with our lazy preference for simplistic and dogmatic solutions, too frequently motivates us out of zones where genuine transformation might occur.

We feel almost a moral obligation to come down on one side or the other, calling one system good and the other evil. Of course, such judgment automatically makes enemies of anyone who might favor the side opposite to ours. With some urgency, then, I want to make the point that romanticizing one system and renouncing the other only shifts an otherwise creative tension into a mutually destructive antagonism. Western culture has been particularly good at that, and the absolute (fixed and irreconcilable) dualism in the metaphysical foundations of our worldview has worked itself up to the surface in an exploding taxonomy of neurotic disorders and sectarian movements through the centuries.

My objective is to show the extent in which the two systems are inextricably involved in our culture, our politics, our religions, our relationships, and our personalities. We might even look outside the specifically human realm and observe these two systems interacting in nature and throughout the cosmos as a whole. This was the great insight of the sixth-century BCE Chinese philosopher Lao-Tzu whose Tao Te Ching is a profound reflection on the dance of Yin and Yang across the manifest universe.

My word-tags for these two systems are “communion” and “supremacy,” and the forces they hold in tension are the power of love and the love of power, respectively. Already we might feel ourselves leaning into one and away from the other depending on our temperament, gender, morality bias, and situation in life. And while I want to respect our individual preferences, my real purpose here is to open the frame wide enough so we can appreciate their interdependency as creative forces in ourselves and society at large. 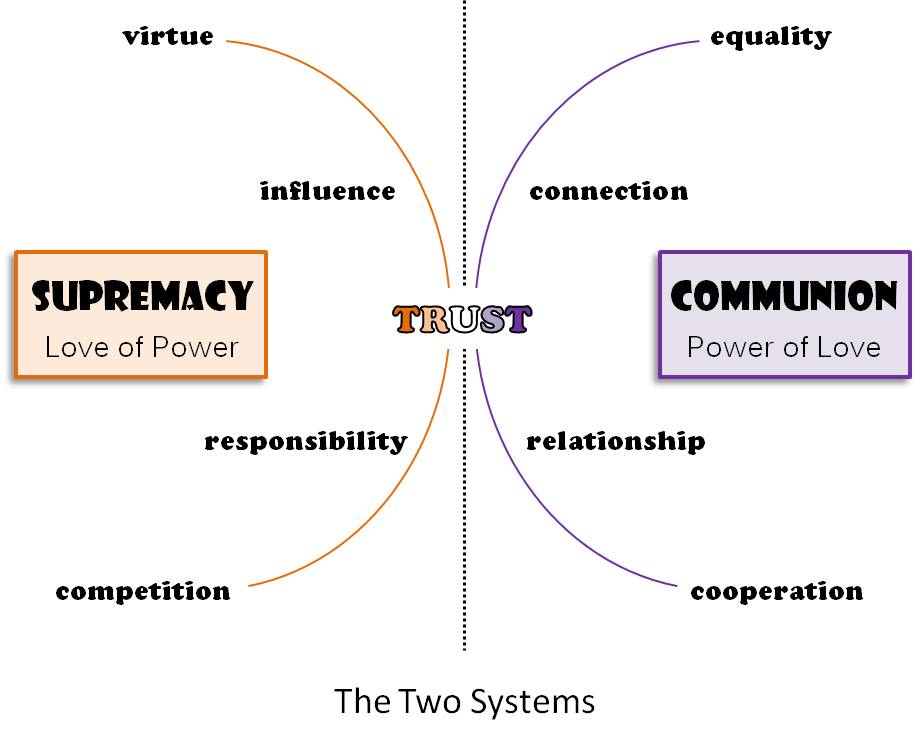 Let’s first look at the particular values that orbit together in each of the systems, and then I’ll come back to the term at the center of my diagram. Supremacy, or the love of power, emphasizes influence and responsibility, competition and virtue. Communion, or the power of love, places a stronger accent on connection and relationship, cooperation and equality. Notice how the terms in my diagram are arranged in such a way that they comprise two arcs, coming so close as to almost merge, then turning away from the center-line and farther into values more obviously identified with one side or the other.

We need to be careful not to break this tension and push everything into an absolute dualism, as has happened so many times in the West. For instance, while it may seem obvious that “competition” is the complete opposite of “cooperation,” in reality (just as Lao-Tzu noticed) there’s is a little of each in the other. Some of our most challenging and enjoyable games put us in a contest where we must cooperate with an opponent in order to compete for a goal. There’s nothing wrong with wanting to win, but we can’t win unless we play by the rules and respect our opponent as a partner in the process.

The opposition of “virtue” and “equality” is one that has swung Western politics for thousands of years. For their part, the Greek philosophers Plato and Aristotle leaned more toward virtue, which they defined as excellence or outstanding strength of character, rather than equality and the degenerate forms of democracy it tended to produce. Absolute equality amounts to a torpid neutrality where the insistence on sameness drowns out and dissolves away anything unique, special, or outstanding that might bring honor to one and not the rest.

Some feel that this push for equality in everything today is flattening out the virtues of the “American character,” effectively neutering the self-reliant and pioneering frontier spirit that made our nation great. But then again, as pioneers became settlers, and settlers became colonists, the exploitation of inequality (of whomever didn’t have land or a gun or a penis) did as much to make our nation as our supposed virtues. This only points up once again the need for balance.

The two systems of supremacy and communion interact as complements to each other, one tempering the potential excesses of the other, and both necessary to the health of the whole – of the whole shebang (cosmos), a whole culture, a whole community, a whole partnership, and a whole personality. While each system arcs away from the other and into its singular values, there is a point where they both come so close as to almost fuse into one. I wonder if our tendency toward extremes, driving us to neurotic breakdowns and dogmatic orthodoxies, is a symptom of our idiocy when it comes to understanding and cultivating genuine trust.

What I have in mind in using this term ranges from trusting others to trusting ourselves, having confidence in the creative process and surrendering to the provident mystery within, between, and beyond us all. This doesn’t have to come together in a formal religion, or even as belief in the existence of a god “out there.” But however we work it out, however we manage (or mismanage) the balance of power and love, that is our religion.