The biblical deity Yahweh has a deep history going back to the habiru, which is a generic term used in reference to a migratory population of nomadic tribes that swept down from the north into the Fertile Crescent roughly between 1800 and 1100 BCE. These northern invaders were resisted as outlaws by the settled cities and agricultural villages they flooded into, and at least in Egypt during the rule of Ramses IV some were taken into slavery. 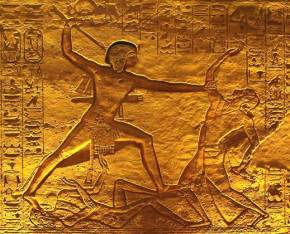 Yahweh was the patron deity of habiru (Hebrews) who inhabited mountains of the Sinai peninsula. His specialty was violence. In exchange for the obedience, sacrifice, and worship of his devotees, Yahweh provided protection and victory in their raids. Over time a number of neighboring habiru formed a federation that would eventually cross into Canaan and take possession of the land. On the way, many indigenous peoples and innocent citizens would be slaughtered or displaced, fulfilling a destiny promised to the invaders by their god.

Whether you are an invader or a native, your response in encountering “the other” tends to be very different. When religion grows out of the conditions of diversity, people work intentionally to build rapport, accommodate each other, and form cooperative relationships. In such regions, religion itself will be a rather pluralistic phenomenon, with perhaps many deities represented across a geographical region – an example being the ancient Indus Valley where “Hinduism” has flourished for millenniums.

But when religion comes in from outside a cultural context, bringing with it alien values and imperatives, the confrontation with difference is typically aggressive, invasive, and violent. Either “the other” will need to be converted – that is, bent into agreement with the invading orthodoxy – or subjugated (which can include oppression, exploitation, marginalization or extermination). Even though dialogue and cooperation may be possible, the prevailing impulse is either/or, in-or-out, good versus evil. The irony is that “good” in this case is identified with invasion, conversion, and violence in the name of god.

Most people are unfamiliar with this backstory to the religion of the Bible and its patron deity. As Judaism – taking its name from a southern tribe (Judah) of the federation that “settled” Canaan and held the first capital city (ancient Salem, renamed Jerusalem) – advanced its international presence, a mythology evolved to help establish this presence inside the arena of regional empires. The myth cycles of Creation, Covenant, and Conquest reconstructed history in a way that elevated Yahweh to supremacy and designated his people (the community telling these stories) as chosen and special.

What interests me is the extent to which this invader mentality (with its imperative to move in and then displace or destroy the other) got encoded into the Bible and became a driving impulse of Western culture. Some important recent authors (Walter Wink, John Howard Yoder, William Herzog, and Jack Nelson-Pallmeyer among them) have named this impulse “redemptive violence” – the use of violence as Yahweh’s preferred means of bringing about human salvation. The important extension of this code, of course, is that Yahweh’s preference motivates and justifies the violent behavior of his devotees.

As Yahweh’s career progressed with the establishment of Christianity, this impulse continued to drive Western expansion – first in the evangelistic mission to the Gentiles, then under the administration of Constantine, and later into the missionary excursions and New World migration of the Americas. As it went on, this impulse also grew more violent, until with the English colonists and European settlers an entire native civilization was all but wiped out in the name of Manifest Destiny (our god-given right to possession).

It’s also important to understand that a patron deity (such as Yahweh) serves a dual role in the psychological development of his or her people. Firstly the deity is a projection of what concerns the security and ongoing survival of his tribe. In this way, our god validates and reinforces our present identity. God hates his enemies and therefore so must I – although the projection is really working the other way around: I hate my enemies and therefore so does my god.

The second role of the patron deity is to represent in ideal what is still only dormant (or latent) in his devotees. As a general trajectory across the world’s cultures, deities tend to develop in the direction of mercy, grace, compassion, and benevolence. That is to say, the ideal of a liberated and morally enlightened humanity is “forecasted” (projected into the future) in the narrative depiction of the deity. In the Bible, for instance, we can observe the gradual maturation and softening of Yahweh into a more loving and universally generous god.

As the literary character of Yahweh was evolving, he increasingly took on an “ambivalent” or schizoid nature. One moment he could reach out in tenderness, and in the next with merciless wrath. By the time of Jesus, this bipolar tendency had inspired various sects and divisions within Judaism. It seems that Yahweh could turn any which way he was needed. His benevolent side was perhaps his dominant function, but he also possessed a stern and violent shadow.

In some traditions this shadow was split off into a malevolent and diabolical counterpart (Satan), while in others it was reconciled as something of a reluctant obligation in god to condemn sinners. God had made the rules, humans disobeyed the rules, and Yahweh was constrained by his own morality to destroy those who failed or refused to repent.

What did Jesus have to say about it?

Because the First Voice of the historical Jesus is buried beneath and tangled into later Christian mythology, it’s not easy to tease out the “red letter” thread of his original gospel. But once you catch hold of it, the power of his message begins to resonate with certain sayings, stories and primitive recollections in the Gospels. The force of it can be summarized as “unconditional forgiveness,” or loving the enemy, and it runs in direct opposition to redemptive violence throughout.

As I have tried to expound on this radical message of Jesus in other posts (e.g., “Jesus, Forgiveness, and a Brave New World“), I’ll just make a few remarks on it here. Basically, Jesus advised that the only way into a human future of freedom, community, and lasting peace is to “let go” of (literally forgive) our neighbor’s guilt. The “good news” (gospel) according to Jesus is that God has already done this for us: nothing is holding us back but our own attachments to shame, fairness, proper reckoning, and moral satisfaction.

There is sufficient textual evidence to suggest that Jesus did more than merely accentuate Yahweh’s “good side” over his violent propensities – his right hand over his left, as it were. Instead he proclaimed, and lived out as if it were true, that God has only love for all people. The only way to love our enemies is to forgive, which is to let go of what you have against them by moral rights (their guilt) and return good for evil. This is why the qualifier “unconditional” is so critical to an accurate understanding of Jesus’ revolutionary teachings on the power of love.

As it happened, his revolution was short-lived. The code of redemptive violence was so deeply insinuated into the cultural DNA of the Bible that his followers soon reconstructed his death (and for the most part disregarded his life and teachings) into a transaction of vicarious suffering for the sake of our salvation. By dying on the cross, he was supposed to have paid the penalty for sin and satisfied Yahweh’s need for retribution. His torture and death, in other words, were necessary to the final solution.

Christianity, as it continued to develop and expand its empire, eventually became the embodiment of what Jesus had sought to transcend and leave behind.

The Judeo-Christian West has a long record of redemptive violence. I read recently that one out of five adult Americans today are either incarcerated, awaiting trial, or on probation. The most charitable nation on earth also has the largest percentage of its population in prisons. The religion that has the most to say about love and how “God is love” is also the most outspoken about retribution and people getting what they deserve.

If the revolution intended by Jesus has any hope of taking hold on a large scale, more people will need to see the irreconcilable contradiction between Christianity’s current message of salvation and his original gospel. It’s not enough to simply lay fresh tile on a faulty foundation. We need the courage to call redemptive violence when we see it in ourselves and in each other, but we need even more courage to extinguish this impulse and make a way for love instead.

One thought on “Jesus Against Christianity”