There is a very interesting paradox at the heart of healthy religion. Our notions of God – just looking across the landscape of world religions, and then deeper into the private religion of individuals – are practically innumerable and infinitely diverse. God is represented as a personality, a force of some kind, a supreme intelligence, or as an utterly abstract perfection.

But this isn’t the paradox I have in mind.

A paradox is something that is “contrary to” (para) “opinion” (doxa) or beyond belief, in apparent conflict with how something is commonly understood. The paradox at the heart of healthy religion has nothing to do with the countless and often contradictory ways that human beings represent God. To think of God as masculine and feminine, for instance, is not a paradox but simply a more inclusive and holistic consideration of the divine personality.

The real paradox in religion has to do with the representation of something that is inherently unimaginable, with all our talk (theology) about a mystery that is essentially ineffable (beyond words). What I’m calling healthy religion acknowledges this paradox and respects it for the corrective effect it has on our tendency to get locked too tightly around what we think God is. Unhealthy religion, on the other hand, fails to acknowledge it and even seeks to invalidate the paradox by insisting that its doctrines are final and infallible. 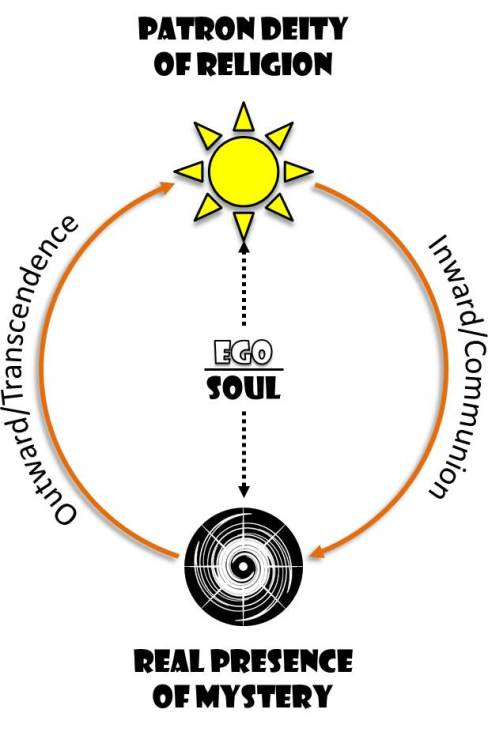 Let’s look inside this paradox in order to understand and appreciate its creative tension. The illustration above depicts this “contained contradiction” at the heart of healthy religion. At the bottom is an icon representing the idea of what is essentially beyond representation – what I have taken to calling the real presence of mystery. This isn’t merely stating that reality is a mystery to our minds, but that this mystery rises up and presents itself to us in the manifold nature of things; as this, that, and the other.

The icon suggests a swirling and dynamic creativity, spinning out the complex arrangement of existence all around us, as it simultaneously turns inward to a place of singular and undifferentiated oneness. This is the generative source of being; not just another being but the power of being itself. If these terms seem inadequate, we shouldn’t be surprised. We are contemplating something that is not a thing; it cannot be made into an object of thought or boxed up inside any definition.

Because this present mystery is the generative and foundational support of everything else, a favored metaphor among mystics is the “ground of being.” Everything we can sense and know moves through cycles of birth and death, emergence and dissolution, coming-to-be and passing away. Like waves on the surface of an ocean, the multiplicity of apparently separate beings, each rolling through the period of its individual lifetime, is really the dynamic action of a fathomless sea presenting itself as this, that, and the other.

The “wave” under consideration here is you. If you could take the opportunity and look deep, very deep within yourself, you would find not just more “me” but something else. Not something separate and apart from what you are, but not some indestructible center of identity either. It is presence – real presence, the presentation of a mystery rising up in this provident moment in you, as you, but also in everything else around you. As you are able to let go and fall into the gracious support of this mystery, all concern for “me and mine” dissolves away, and only a profound awareness of communion remains.

As I said, healthy religion encourages individuals to descend by this inward path into the presence of God and communion with all things. The “of God” represents religion’s final words before the soul plunges into the depths where language is no longer effective; but neither is it necessary. The word mystery comes from the root “to close,” which is gentle reproof of our tendency to open our mouths with incessant commentary on something that can’t even really be named. Our instinct for meaning takes time and practice to restrain in the presence of mystery.

But religion doesn’t just leave you there. There are also unhealthy forms of mysticism, which simply revel in communion with the present mystery but lack any interest in exploring its connections to everyday life in the world. In my experience, these unhealthy forms of mysticism characteristically denigrate the ego and renounce the realm of daily concerns. They try to press the wave flat, so that only the infinite ocean remains.

While the ocean is more than the waves at its surface, the waves are nothing less than the ocean itself. Your identity – the separate “who” that you are – is distinct from your essence which unwinds into the depths of being itself. Identity (ego) is a product of social conditioning, the place in your personality where consciousness has been bent back into self-consciousness by the disciplines of your tribe. For this reason it is commonly called the “conditioned self.” Ego is the ‘I’ who is “one of us,” an insider, both product and agent of the collective.

“Patron deity” in religion refers to the representation of God as a personality who stands in a reciprocal relationship with devotees, providing something in exchange for their worship, offerings, prayers and obedience. It is more than just an “idea” of God, then, and goes beyond mere belief. Reciprocity is the key. Devotees are aware that their patron deity calls them to something, puts a demand on them, or promises a reward for their fidelity, commitment, and sacrifice.

It’s important to understand that the patron deity is a literary figure, not a literal one; a figure of story, art and imagination rather than an actual separate being (out there, up there). Especially in a religion where sacred stories have been reduced to factual records, such a statement will be regarded as heresy, disbelief, ignorance or a loss of faith. There will also tend to be a corresponding lack of spiritual depth, and not much appreciation of mystery.

In healthy religion, the tribe orients and guides ego through the course of development, from the impulsive stage of childhood, through an imperial phase of adolescence, and eventually into the responsibilities of adulthood. The transition between childhood and adulthood – not a formal stage but rather a phase in development known as “growing up” (adolēscere) – is where ego frequently gets stuck. During this time an individual can come to fervently believe that “it’s all about me.”

The imperial ego is predictably self-absorbed, strives for superiority, seeks glory, and is jealous for the exclusive love and worship of others. Interestingly, every religion has to evolve through its own adolescent phase, where the patron deity is depicted and praised in exactly these terms. The earlier depictions of a more maternal and provident nature are rather dramatically rejected (or demoted to secondary attributes) in the exaltation of a supreme lord and king. If the evolution of religion can successfully transcend this self-centered phase, believers will eventually be empowered to take up a more stable, responsible, creative and benevolent attitude in life.

What I’m calling the patron deity, then, is complicated by the fact that it stands in a paradoxical relationship to the grounding mystery of reality, but at the same time represents progress (or arrest) in the spiritual awakening of its devotees. Just a quick survey of the Bible, for instance, reveals a “growth chart” in how its patron deity (Yahweh) gradually advanced from a jealous demand on the obedience of insiders, into a compassionate interest in outsiders and those who suffer, and opened fully at last into an unconditional love for the enemy (articulated as forgiveness in the teachings of Jesus).

Along the way, Yahweh’s devotional community (as a function of its individual egos) advanced accordingly – or I should say, along a slightly slower curve behind the guiding light of his ideal. At times it has gotten hung up. Concerns over natural resources, national security, who’s in charge, and the uncertainty of the future have occasionally provoked individual egos (and consequently entire tribes) to twist up inside themselves and grip down in fear. At this historic moment, in fact, we are in the midst of a regressive hiccup through our adolescent phase, as fundamentalists of various brands hunker behind ramparts and prepare for war.

If we can appreciate – which of course means that we must first acknowledge and accept – that our patron deities are representations-in-transcendence of what is going on (or turning off) in ourselves, then there is a chance that we will be able to not only survive the current regression into conviction and violence, but finally wake up to the real presence of mystery in ourselves, in each other, right here and now.