In my defense of a new humanism, I made the case that Western consciousness shifted into a post-theistic morality with the radical teachings of Jesus. Where the motivation to do what is right had been conditioned by a powerful external incentive – approval, inclusion, divine favor and final salvation (or the opposite if you break the rules) – Jesus opened a new way. 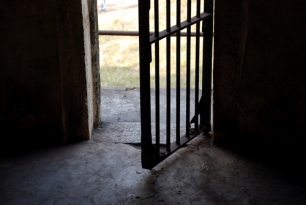 The incumbent deity (Yahweh) had come out of a mythological background of a small near-eastern tribal confederation of nomadic invaders who managed the conquest of agricultural settlements in the land of Canaan. As a warrior god, Yahweh possessed little tolerance for diplomacy and compromise. But to his credit, over time he did start to soften up a bit, balancing wrath with mercy, vengeance with compassion, retribution with forgiveness.

Yahweh’s war box (the ark of the covenant), which had been carried at the front lines of Israel’s army, giving them a supernatural advantage over the indigenous farmers they massacred, was already lost in the misty hinterland of folklore and legend by Jesus’ time. Nevertheless, Yahweh’s accent on purity and obedience was still strong, and it resounded in the religion that remembered and worshiped him.

Let’s be clear: Yahweh was capable of forgiveness. As long as certain steps were taken – that is to say, insofar as particular conditions were met and satisfied by the repentant sinner – Yahweh could be persuaded to let the poor soul back into his good graces. There was a limit to this generosity on Yahweh’s part, of course, and repentance needed to happen first. God is no sucker.

Already 600 years or so before Jesus, the prophet Jeremiah had fantasized a day when god would simply drop the charges against humanity and enter a new relationship with his people. The knowledge of his will would transcend instruction and be grasped intuitively, written on their hearts. Fortunately for Jeremiah, he didn’t put a date on this future New World.

What would inspire someone, even god, to just “let go” (forgive) and rip up the rap sheet on sinners? What purpose could this serve? Why violate the Rule that had set the rules in the first place? Isn’t that tantamount to throwing out everything – responsibility, accountability, decency and fairness – upon which the moral order depends? So it seemed. And so Jeremiah’s little nightmare about unconditional forgiveness and the beginning of a New Age was rolled up, tucked away, and forgotten.

But the seed was planted. Once an “impossible” virtue like compassion for outsiders, charity for strangers, or mercy for those who just might be getting what they deserve – once the virtue is projected into the collective consciousness, it is just like a seed. It may sit there, covered by dirt and “forgotten” under the urgencies and concerns of daily life for many, many years. Decades or even centuries. But there it is nonetheless, waiting for the conditions to be right.

In Jesus’ time, the conditions were right. But just as important as a generally favorable milieu is the individual who is sufficiently inspired, courageous, and “morally reckless” to announce the moment of awakening and risk everything for its actualization.

16 When Jesus came to Nazareth, where he had been brought up, he went to the synagogue on the sabbath day, as was his custom. He stood up to read, 17 and the scroll of the prophet Isaiah was given to him. He unrolled the scroll and found the place where it was written:

18 “The Spirit of the Lord is upon me,
because he has anointed me
to bring good news to the poor.
He has sent me to proclaim release to the captives
and recovery of sight to the blind,
to let the oppressed go free,
19 to proclaim the year of the Lord’s favor.”

20 And he rolled up the scroll, gave it back to the attendant, and sat down. The eyes of all in the synagogue were fixed on him. 21 Then he began to say to them, “Today this scripture has been fulfilled in your hearing.” (Luke 4:16-20)

As Luke tells the story, Jesus made the announcement as part of a sabbath sermon. In that day, a member of the synagogue might walk up to the front of the room, be handed a scroll of scripture, read the passage and offer an interpretation. In this case, Jesus opened up the prophecy today known as Third Isaiah, likely written just after the return to Jerusalem from exile in Babylon (post 538 BCE).

The “year of the Lord’s favor” was another mythic reference, going “back” to the ancestral past when the people of Israel celebrated a Year of Jubilee. Every fifty years – after seven cycles of seven years – all debts were forgiven, slaves were set free, and lost property was returned to its original and rightful owners.

Jubilee was an archetype of the New Beginning, the clean slate, a fresh chance to start again. It’s what the human spirit longs for. But it never made the transition from mythic event to actual occasion. For practical considerations alone, no society could survive such a radical shake-up of its economy as Jubilee represented. It was what we call an ideal.

In Isaiah’s original, the last phrase read by Jesus is actually part of a couplet that finishes with “and the day of vengeance of our god.” Isaiah’s fantasy, then, was of a time when Yahweh’s favor on his people would be realized and his judgment meted out on their enemies at last. There was still hell to pay.

We need to imagine the force of shock that must have seized the congregation when Jesus, after leading his audience along the lyrical rhythm of this well-known and much-loved passage, suddenly stopped short of full circle, rolled up the scroll, and sat down. In their minds that last line was screaming for validation, but Jesus denied it permission.

What he did next was even more scandalous. He looked up at the congregation and declared, “This vision is being fulfilled today, right here and right now.” Today is Jubilee. All debts are forgiven, the prison doors have been thrown open and everyone is free. A new age has begun and a new order is in effect starting today.

In his evangelistic campaign across Galilee, Jesus called this new age and new order the “kingdom of god.” It’s coming up out of the dirt, he said. It shows up around the corner, in the messiness of life, from the least likely of places.

Not long afterwards, when Christian orthodoxy did a make-over on Jesus and turned him into god, this radical challenge to conventional morality would be neutralized. Of course! Who else but Jesus – very god in the flesh – could manage such a feat? For the sake of our salvation he interceded for us, securing god’s favor and saving us from his wrath. By dying in our place, paying the penalty for our transgressions, and taking upon himself god’s judgment against sin, Jesus is our salvation.

The old game is still in effect, however. If you refuse to “believe in Jesus as your personal lord and savior,” your destination in the afterlife won’t be pleasant. At all. Jesus managed to turn god towards you; now you must turn to god by accepting Jesus as your savior. For those who don’t, “the day of vengeance of our god” awaits. Whew! Nothing’s really changed.

As Matthew tells the story, the disciple Peter approached Jesus one day with a question. “According to the rules, god expects me to forgive my enemy three times” (a number that represents perfection). “What do you think? Should I forgive my enemy as many as seven times?”

Perhaps in his desire to impress Jesus with his above-and-beyond righteousness (doubling the old rule and adding one more for effect), Peter was looking for that surprised admiration that any student craves from the teacher. See him standing there, puffed up and plucking proudly at his suspenders.

Jesus replied: “Why are you counting? Forgiveness is not a response to an acceptable repentance. It must come first and never keep a tab. Let go of your anger and your hurt will heal. Extinguish the insatiable flame of vengeance and you will be free. It’s time for you to be strong and take the initiative: Stop tracking offenses and don’t wait for your enemies to repent. Let go, open up with love, and just see what happens.”

If your god keeps a record of sins, hates his enemies, and can’t wait to make them suffer – or perhaps is bound by a reluctant obligation to condemn sinners and unbelievers – then it’s time to leave that god behind and step into a brave new world.

There, the seed is planted … again.

One thought on “Jesus, Forgiveness, and a Brave New World”