Evolutionary theory offers an explanation of how our human species emerged and adapted from simpler, more primitive life forms, and then proceeded to evolve, more psychologically and technologically than biologically, through a series of cultural revolutions. In the modern period, as individual development across the lifespan was more carefully studied, some theorists noted how individual stages of development seem to follow the same sequence as the evolutionary phases in human emergence.

Accordingly, primitive human culture was psychologically similar to early childhood today, where societies lived more in their bodies and closer to the guiding influence of animal instinct and the rhythms of nature. With the rise of the more advanced city-state came new concerns regarding national identity, the differentiation between insiders and outsiders, and the management of roles across the social scene – very much like an individual today during that embattled period between childhood and maturity called adolescence (literally “becoming adult”).

In the evolutionary history of human culture, just as in the developmental history of individuals today, the process of becoming a self-actualized human being has gotten hung up around fixations on security. In ideal (or good-enough) situations where basic needs are met and individuals internalize an assurance of reality as provident, security is adequately established and the higher challenges of maturity can be engaged. When this doesn’t happen, however, the need for security persists as a preoccupation, overriding and “out-competing” subsequent opportunities along the way to self-actualization. 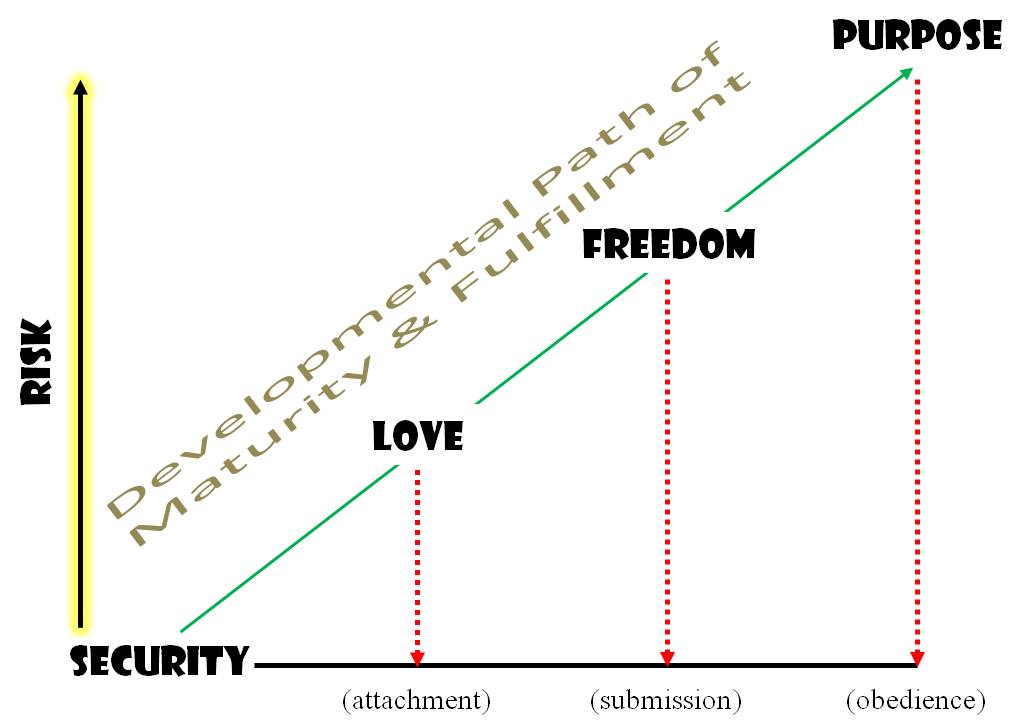 The above diagram illustrates this “schedule of opportunities” in human self-actualization (which I also call fulfillment), along with the various ways that progress gets arrested when security is compromised. The schedule is comprised of four stages, which can be thought of as advancing steps that provide important stability for what is to come. Thus security itself is the stable foundation for healthy love. This in turn provides support for the adventure into freedom, which then serves the individual’s sense of higher purpose in life.

With each advancing step, more of the individual’s destiny is put into his or her own hands, where courageous and creative choice shapes the future. Along with this growing responsibility, however, comes increased risk, putting more in jeopardy – in the form of rejection, disorientation, and failure – as the path unfolds. You should be able to empathize with those who forfeit love or freedom or purpose for the sake of “playing it safe.” For all I know, you may be one of them. Most likely, we all struggle with this to some extent.

When the need for security during infancy and early childhood is compromised, the individual’s nervous system gets set at a higher “idle speed,” raising vigilance and sensitivity to signs of trouble. Of course, it’s likely advantageous to be hyper-aware of external threats or problems as they arise. But ordinary life is never without stress, which means that such individuals frequently overreact and end up making things worse for themselves. What might have simply floated down the stream of experience instead triggers alarms and initiates avoidance/protective/aggressive measures that can actually create a problem of pressing urgency.

In relationships a primary adaptive strategy that an insecure individual will commonly use is called attachment – not the quiet, oxytocin-infused tranquility of the nursing bond, but a neurotic gripping-down on one’s partner for the assurance that reality is safe, provident, predictable, and under control. As you might guess, no relationship can deepen and grow in positive ways when one or both partners are clinging to the other with such frantic intensity. The natural course of flux and change provokes high anxiety that pathologically interferes with the need of the partnership to evolve.

Whereas healthy relationships provide a necessary support for the individual’s forays into experimentation, autonomy, and personal choice (freedom), a critical shortage of internal security will often motivate him or her to surrender freedom to another’s control. This is what I mean by submission: putting oneself under the will and command of someone or something else in hopes that this external power will hold everything together and make it all right. Again, while a dependent and helpless newborn needs to surrender to the providence of caretakers, later on, by the time an individual ought to have developed some healthy autonomy, such security-seeking submission only fosters the conditions for co-dependence, exploitation, and abuse to occur.

Finally, deep-seated and chronic insecurity will undermine the individual’s liberation into a life of purpose – by which I mean a life lived with purpose, on purpose, for a purpose that is uniquely his or her own, and which is experienced as a high calling of universal import. My word for this neurotic alternative to a holy purpose is obedience, fittingly derived from the root-word for “servant or slave.” Just as with the other terms, we need to distinguish a normal and healthy kind of obedience from one where free will and personal responsibility are effectively canceled out and replaced by simply “doing what you’re told.”

A self-actualizing adult human being is not necessarily one who constantly challenges the rules and expectations of society, but neither does he or she blindly fall in line with what external authority dictates (including also the status quo, or what “everyone else” is doing). Just because some authority demands conformity with a certain way of thinking, believing, or behaving doesn’t mean that it’s true or right or just. And just because “God says it” in the pages of scripture doesn’t put it beyond debate or doubt or conscience.

This last point brings me to my chief complaint against theism: not in the way it personifies and locates God as the patron deity of one or another tribe of true believers, but how it promotes attachment, submission, and obedience in its devotees. Theism today has become for many a shelter of security where love is reserved for insiders, where individual freedom is discouraged or condemned, and where being “purpose-driven” amounts to living by the rules and doing what god wants you to do. Never mind that the job description is conveyed through a long line of all-too-human brokers, each borrowing on the authority of others long dead, out of this world, or metaphysically inaccessible to the rest of us.

Considered developmentally, theism ought to help establish in the individual a deep security in the grounding mystery; orient him or her on a personified ideal of love, freedom, and purpose; and consistently challenge the believer to “be like unto god,” to the point where the divine character is fully internalized and incarnated in daily life. Then (and really only then) can self-actualized parents, teachers, and community leaders conspire benevolently in demonstrating providence to the very young, encouraging faith and lifting up a new generation of holy human beings.